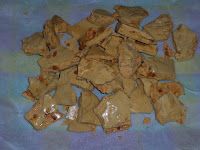 Last night I went to a dinner party being thrown by Josie, at a house she was minding in Paddington. I wanted to contribute but knew that Josie would have catered for everything so I decided to whip up a batch of Nigella Lawson’s Hokey Pokey, to have with coffee.

It’s amazingly quick to make but I have to say that even after my third attempt at this recipe, I have had mixed results. The first time I ever made it, the batch did not have the desired crunch that you look for in honeycomb (for that’s what it is). I ditched it straight away and made up a 2nd batch – that was a lot more successful as I cooked the sugar for longer and added extra bi carb. The down side of extra bi carb however is that it makes the honeycomb saltier. I don’t mind the combo of sweet and salty but it’s not to everyone’s tastes.

This time, I followed the recipe to the letter but had mixed results again. Anyone who has read a Nigella recipe will know that she is sometimes scant on detail and I think the crucial element missing in her recipe is the temperature for the sugar (100gm) and golden syrup (60ml) combo. She suggests cooking for 3 minutes until the colour of maple syrup. Well considering it already has golden syrup in it, how different would the colour be anyway? At 3 minutes, mine was bubbling but had not changed colour. I just continued to cook but obviously a higher heat would have produced the desired colour in the stated 3 minutes.

After cooking, you add the 1 1/2 teaspoons of bi carb and whisk. The mixture immediately foams and turns golden, then you whack it onto some parchment on a tray as quick as you can. You need to be quick as it starts to set even as you turn it out onto the tray. After it has set – you can smash or break it up into pieces.

Again, I had a problem where there were some parts that were aerated and crunchy but other parts were chewy. The outer coating before I broke it up was glossy and I suspect it should have been matt – perhaps I need to cook the sugar/syrup mix harder. It’s so easy to make, I will keep perservering.

None the less, everyone scoffed it down, chewy bits and all and looked for more. I think however, it would have been a challenge for anyone with dentures.