Fit For A Queen’s Birthday

After a leisurely weekend of camping at Wivenhoe Dam, I came home with far too much food that should have been consumed over the weekend but wasn’t – due to Bronlynn’s and my reputation for never knowingly under catering. I had more than a few items that had been exposed to minimal refrigeration and were starting to show distress after being carted back and forth. The best option was to whip up some multi purpose muffins. I always use the recipe from the Family Circle Recipe Encyclopedia as it’s quick and relatively low in fat. (recipe below)

As per usual, I strayed rapidly from the recipe. In the end, to the basic mix I added an extra portion of ‘fat’ in the form of a glug of oil, a grated zucchini, a handful of chopped olives, a small tin of drained corn niblets, a handful of leftover feta cheese and a pinch of sumac + cheese on top. I decided to cook it as a loaf rather than muffins so the cooking time was around 40mins. It could have done with a little longer as it’s slightly on the moist side but I know it will toast well over the next few days, to have with soup at lunch time (the weather has taken on a decided chill over the past 24hrs). I’ve already had 2 pieces and it’s delicious with a great, cheesy crunch on top! 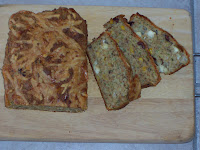 Melt butter (in the microwave), add milk and mix to cool, add egg and mix again. Add to sifted dry ingredients. This is you basic muffin mix – but ready to be amped up by lovely sweet or savoury additions. Bake at 200c for 20 – 25 mins (makes 12)