Before we talk about the great recipe below, a word about the Cook and the Chef. You may have fallen out of love with it, started to find it a bit pedestrian or come to rely on it being there.Watch Out! This is the last season for Simon Bryant and Maggie Beer. Whilst Simon is sometimes a little too cute and Maggie’s plates always look like they are from a grade 8 home economics class (though they taste nice), we’ll no doubt look back with regret when they leave our TV screens at the end of the year. Now is a great time to re-connect as the major focus of this season is people who shaped what we eat today. The key theme is Australia but others creep in too. Lot’s of fantastic 1960’s – 1980’s footage of people such as Maggie, Stephanie Alexander, Don Dunstan (!), Cheong Liew, Tetsuya, Gay & Tony Bilson and my personal fave, Charmaine Solomon.

Having said that, Maggie made a great dish a few weeks ago that I recently re-created because Anthony commented ‘That looks nice’. I think he was more impressed by the height of the tart shell rather than the filling. Based on an Elizabeth David recipe (Tarte A’ L ‘Oignon – French Provincial Cooking and/or South Wind in the Kitchen), Maggie adapted slightly, using her Sour Cream Pastry and adding crispy bacon on top. I adapted by leaving out the bacon and using (gasp!) store bought shortcrust pastry as part of my ‘it’s all got to go as she cleans out the pantry before going O/S’ push and including spinach. As someone who probably buys sour cream twice a year and cream once a year, this was certainly a big dose of lusciousness.

Preheat oven to 200C.
Line a 24cm spring-form pan with sour cream pastry and line with baking paper. Fill with beans or rice and blind bake for 10-15 minutes and remove beans. Bake for a further 5 minutes. Remove from oven.

Finely slice the onions and heat some butter in a heavy based pan. Cook the onions slowly in the butter until soft and slightly caramelised. I left these on for much longer than the specified 15 minutes as I wanted them to be highly caramelised (and I added a pinch of brown sugar for good luck). Cool and add the parsley (or spinach and the thyme if you’re using it)

Beat the eggs and egg yolks together then beat in the crème fraiche, cream, and nutmeg together. Add the onions to the bottom of the pastry case and pour the egg mixture over the top.

Bake for about 25 minutes at 190C. Cool for at least two hours, out of the fridge, before serving.
If you need to serve within half an hour of taking it from the oven, push the cooking time to around 35 minutes, then rest for 20-30 minutes. 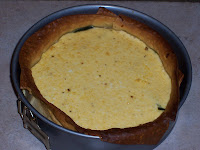 It turned out very well indeed and my goodness, it was rich! If I was making it again, I would actually stir the onions through the custard before baking. They were fine on the bottom but there was no real reason not to have them mixed through to distribute the caramelised flavour. A little of this goes a long way so I’d suggest this would easily serve 6 at a dinner party (and you can pre-prepare).

Now – make sure you pencil in The Cook & The Chef for next Wednesday evening, 6.30pm.