on September 11, 2009 by Fiona Ryan
Filed in: Restaurant Review, Travel

Who says you can’t eat well and at the right price in Paris? Who says there are no decent restaurants in the double digits? Obviously they have not visited Cave de l’Os a Moelle. On of all things, a recommendation from the Qantas magazine, we visited this Cave in the 15e (Metro 8: Lourmel) on a very warm Wednesday evening .

What a wonderful experience. This narrow wine cave has communal dining with the tables crowded into the narrow back area and as well as an ancient wine press set for 6 diners, at the front near the bar. Our host advised us it was ‘buffet’ but it was clear that this was no Sizzler. By the time we arrived, the first sitting at 7.30pm had only just commenced and the joint was jumping. All tables the back were full with a couple of large groups so we took our seat at the front. As it turned out, this was a better option. Although we were perched on stools, the dining area at the back was cheek by jowl and the air on conviviality was fuelled by copious amounts of wine, making it perhaps just a little too jolly for a relaxed night’s dining.

The tables are set with a vast array of starters, to which you help yourself – as much or as little as you like. Included were crudite’ legume and mayonnaise (with sweet, hot, crunchy little radishes that are fantastic), boudin noir (blood pudding), pate campagne (pork terinne), rilletes de canard (duck rilletes). If that’s not enough, there are dishes of cleriac remoulade, grated carrots and grated beetroot as well as endless accompaniments such as cornichon, moutarde, buerre, sel etc (gherkins, mustard,butter, salt) and of course, fresh crusty pain de campagne (rustic country style loaf bread).

The boudin noir was a bit to fatty for my tastes but the flavour was mild and whilst the pudding itself was chunky, the consistency was smooth. Both the pate and boudin noir had been cooked in their stoneware pots, covered by the traditional caul. The rillettes were also mild in taste and had a good layer of duck fat covering them – these are certainly not dishes that will fete’ vegetarians, nor cardiologists. 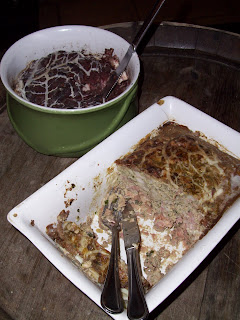 Returning our empty plates to the bar, we collected a clean plate from the stack of mismatched crockery and cutlery and fought our way to the back of the restaurant, where the soup and main of the day, sat bubbling on the stove. Once again, you help yourself, and it feels a lot like you are serving yourself in someone’s private kitchen. It’s a little clunky trying to juggle your plates and serve in the incredibly cramped space and it’s very hot near the stovepipe so it was a relief to get back to the wine press and tuck in. Soup of the day was simply labelled ‘poisson‘ (fish) but was in fact a rich, velvety bisque. Strong in taste and quite addictive.

When we had scoped out the restaurant earlier in the day, the main had been Roast Pork but unfortunately, that had finished at lunch. Dinner offered up Pot au Feu (literally ‘pot in the fire’ and traditionally meaning lesser cuts of beef, simmered with herbs, carrots and turnips). The beef was incredibly tender with the spring onions that had been added towards the end, giving a sweet crunch to the soft texture of the meat. I was not a fan of the vegetables, which were served in a separate pot – mainly because I can’t stand cooked carrot and turnips aren’t high on my list either. Anthony assured me they were delicious and helped him to maintain his ‘7 a Day’.

When I was serving my main, I grabbed one of the small pot au chocolat (no translation needed) as I could see the tables that were closer to the action, devouring the desserts like locusts. Just as well, the pots soon disappeared and unlike most of the food, there was no replacement We tried the chocolate pot which was smooth and tasted of good cocoa (intensely chocolate with a hint of bitterness) and only mildly sweet. A vanilla pot tasted sweeter and reminded me of the junket that I used to have when I was very small. The dessert table was extensive with candied fruit, rice pudding, sweetened ricotta, 3 different types of cake (chocolat, banane, raisin) as well as the biggest bowl of Ile Flottante (Floating Islands) I have ever seen. The bowl of creme anglais was huge with perhaps 30 soft meringue islands floating on top, dotted here and there with small nuggets of praline. I was interested to see that the meringues were snowy white and had not been finished off with a blow torch to scorch and caramelise the tops, like I have seen in Australia. This dessert will always be linked in my memory to New Year’s Eve 1999 when we ate at La Kasbah before welcoming in the new Millennium. Like all the other dishes before it, we were welcome to just dive on in and serve ourself! Needless to say, we both did.

As a complete Philistine, I ate the cheese course last, rather than before dessert as it done in France. The plate was made up of soft cheeses including a couple of different chevre and Camembert styles – just cut as little or as much as you like. By this time, as you can imagine, we were fairly full but it would be criminal not to fully commit to the experience. Again, in what is no doubt considered an act of bad taste, I added a couple of prunes from the compote to my plate as well as some bread. Cheese is eaten as a savoury course in France, with salad and sometimes a few nuts. It’s certainly not served up with muscatels, quince paste and poppy seed lavosh. But there you have it – you can take the girl out of Australia but you can’t take Australia out of the girl!
By this time, the Cave was gearing up for the 9.30 sitting so we made a quick exit, before the partiers at the back started to tot up and attempt to pay for their bill. Our own bill was a modest (by Parisian standards) 64e with the meals costing 22.50e each with the balance in wine. This was a fabulous experience and we were lucky to find this type of bistro. There was no concern about sharing of serving implements, using you hand to pick up the loaf of bread and cutting your own slices with the big, sharp, scary knife or protecting the food with plastic barriers. There was absolutley no pretense at all – just a relaxed atmosphere of sharing good food. It would appear that there aren’t many of these bistros around anymore – or rather, there are still some out in the far flung corners of Paris but they are local neighbourhood establishments where tourists don’t generally go. And this one so close to where we are staying!

It would appear that all that travel for work, finally paid off……