on November 8, 2009 by Fiona Ryan
Filed in: Restaurant Review, Travel 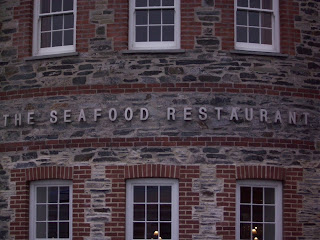 We drove down into Padstow, no doubt once a sleepy fishing village until Rick Stein came along and bought up the town. He owns The Seafood Restaurant, St Petrocs Bistro, Stein’s Patisseries, Rick Stein’s Café, Stein’s Fish & Chip shop, a Deli, a Gift Shop and a Seafood Cooking School. Add to that several B&Bs and it’s no wonder that its known as Padstein! Having said that, its not overly huge or over developed as the town is constrained to some extent by the headland, bay and landscape. None the less, as you drive down into the town, you pass a number of huge pay and display car parks to house all the visitors, primarily attracted no doubt just as we were, by Rick Stein and his empire.


We parked just as we entered the harbour in a pay and display car park in front of some low key, non descript buildings, one of which just happened to be the Seafood Restaurant. I can’t say that you would be paying for the view and it’s surprising that they haven’t put the restaurant on the 2nd floor to get the best of the harbour and coast views, rather than the car park! 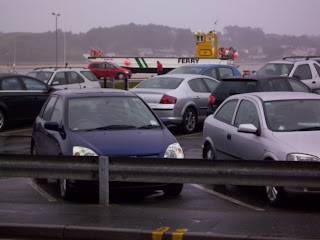 Once we were inside, all of that was forgotten as we were seated with our menu, wine list and small bowl of olives. The décor was pleasant, with beech wood, subtle sea themes such a huge bell jars full of bleached starfish and eclectic artwork, each featuring a fish somewhere in the painting. More Cape Cod than Padstow. We were swiftly offered some delicious warm home made bread (2 types) to go with our cute little dabs of butter wrapped in squares of greaseproof paper with‘Cornwall Butter’ stickers and our drinks orders were taken. The professional and fast service continued throughout the meal and I could not fault them. They were attentive and pleasant, not overbearing or pushy and more importantly (and one of my big tests), the water remained topped up, as did the bread basket.


We toasted Anthony’s birthday with a glass of genuine French Champagne (NV) and perused the menu. I should have spent more time looking at the A la Carte’ menu (main around 30 pounds) but we were dining off the set menu and there was plenty to choose from. Like most restaurants, when summer is over, it is often hard to make ends meet (particularly in coastal towns and the country). Many restaurants offer deals to attract customers and Stein is no different with a 3 course 28.50 menu at The Seafood Restaurant and an Autumn 3 course 17.50 menu at St Petrocs (which was our back up if we could get into The Seafood Restaurant). Happily, because it is out of season, a booking was not a problem.

There were plenty of choices for the entrée (starter), main and dessert and I was surprised at the variety on offer and generosity of portion size. It was genuinely hard to choose but eventually I settled for Salt & Pepper Squid for an entrée and Anthony went for the Lobster & Fennel Risotto with Lemon Oil. Other options included Mussels with Black Beans, Garlic, Ginger, Coriander & Spring Onions; Fish & Shellfish Soup with Rouille & Parmesean and Local Sardines. My portion was quite small with only 5 pieces of squid that had been lightly dusted in some salt and pepper and flash fried in a hot pan with chilli. The squid was tender and wonderfully tongue tingling. It was accompanied by a small salad of cucumber and shoots in a Thai influenced dressing with lime and some deliciously nutty sesame oil (a fave). I really couldn’t fault it and was only sorry there wasn’t more. The Risotto was more generous and certainly as it should be, creamy with large pieces of lobster mixed through and contrasted with the sharp lemon. Risotto is so unreliable in restaurants that I rarely order it however, there was not really any doubt, from the moment we walked in that every item was going to be cooked, seasoned and plated to perfection. 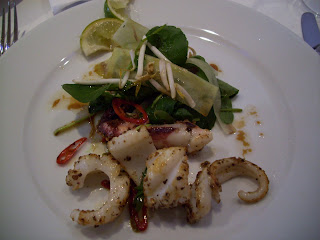 Our plates were cleared promptly and our mains arrived, along with a dish of turned potatoes, one of roasted butternut squash and a third of Savoy cabbage. I had glanced at the menu to check for sides but did not see any listed. Happily, it appears that Rick is not always out for a quick buck and in keeping with the theme of ‘generosity’, serves seasonal accompaniments for his guests to enjoy, for gratis. Delicious they were too, particularly the butternut.

Tempted as I was by the Indonesian Curry with Monk Fish, Squid & Tiger Prawns, served with a coconut salad, the Bouillabaisse had to be the ultimate choice. I have seen Rick wax lyrical on many occasions about this fishy, soupy stew and I know that the French are very strict about what they consider to be a true Bouillabaisse, which must include particular ingredients such as the Scorpion Fish (Racasse). The little blurb on the menu said that this was Rick’s lighter take on this classic dish. It didn’t disappoint, with Mussels, Gurnard, Sea Bass, Plaice and topped with a small (but impractical to eat) Velvet Crab. It was accompanied with a Rouille, Parmesean and some large crouton discs. 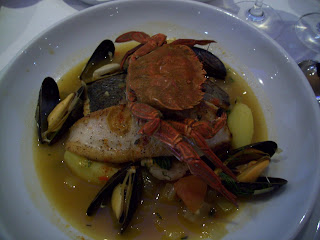 I gave up quickly on the crab which no doubt had a very small amount of meat in it but was impossible to get at without a crab pick. After the attempted crab and the de-shelling of the mussels, a finger bowl wouldn’t have gone astray. After adding the mussels to the dish, I drizzled it with the Rouille and scattered the Parmesean over the top. I’m generally not a fan of fish and cheese combos (nor are many others) but I must say that the cheese over the Rouille and fish was a revelation. It was sharp and tangy and really lifted the dish. The flavours in the soup were light and fresh with plenty of discernible vegetables (celery, onion, tomato) and herbs (dill, sage, parsley) and the warm flavour of saffron. Whilst I had misgivings when I ordered, I wasn’t disappointed at all. 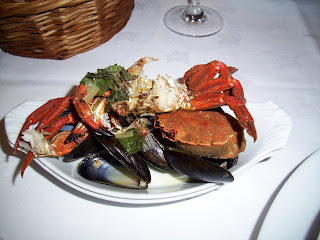 Anthony chose the unusual combination of Skate Poivre with Béarnaise Sauce. Neither of us have had Skate before and it came away from the gelatinous bones of the wing with ease. The pepper coating was extremely strong and overpowered the fish but with the addition of the Béarnaise Sauce, all of the heat from the pepper was neutralised completely, turning it into a moist and tangy dish. Wouldn’t want to try it without the sauce though. Other mains that didn’t get a look in included Fish Pie & Peas; and Hake with Spring Onion Mash and Fresh Morels.


And then, onto dessert with Lemon Tart, Bread & Butter Pudding, Vanilla Rice Pudding, Pavlova or a Cheese Plate. Coincidentally, we had had both Bread & Butter Pudding and Lemon Tart the day before so it was Warm Vanilla Rice Pudding with Strawberry Jam for Anthony and Pavlova for me. But first, the waitress was back to crumb down the table. Now that’s something you don’t see every day and once again, it was done proficiently and without a big song and dance. My meringue was sticky and really chewy, very nice with the passionfruit and crème anglaise’ drizzle. I thought the perfectly rounded dome of cream was ice cream but it turned out to be thick clotted Cornish Cream. A little goes a long way and I didn’t think it was the best accompaniment for the deconstructed Pavlova, so most of it stayed on the plate. 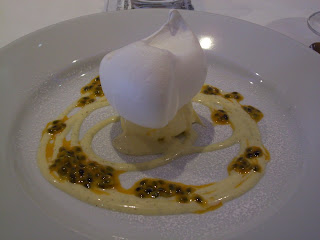 After coffee and petit fours, there was just enough time to check out the bathrooms (very nice) and pay the bill before we had to feed the parking meter again. We both had a really, really good time and as I have said elsewhere, I couldn’t fault the food, service or ambience. In my opinion, better value for money and better food than ARIA. My only niggle was that the tables were very close together so you could see everything your neighbour was eating and hear everything they were saying. Guess there is just so much demand that it’s impossible to resist squeezing in a few extra covers. 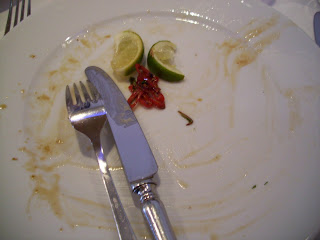