on December 21, 2009 by Fiona Ryan
Filed in: Restaurant Review, Travel
Plans for the day were revised once we woke to a light dusting of snow and sought adventure closer to home, rather than drive on the icy roads.  Sunday lunch at The Greyhound Inn in Saughall was the choice, within walking distance of the house and recommended by several neighbours.  The pub was busy and we chose a small corner table close to one of the open fires and enjoyed watching a second flurry of snow as we sipped our drink and perused the menu.
The restaurant at the pub is called ‘The Horned Woman’, named after former resident Mary Davis who lived in Saughall in 1668.  The menu was standard UK pub fare with Soup of the Day, Duck & Port Pate and Stilton Mushrooms for entrées and a selection of Sunday Roasts for mains.  There were a few unexpected items though such as Black Pudding, Buttered Mash & Onion Marmalade or the Fresh Crumbed Whitebait with Paprika, which we selected. The Whitebait was hot and crunchy and best of all, home made.  Served with a fresh little side salad and pot of mayonnaise, it was a tasty starter to share.

We chose Roast Lamb and Roast Pork for our mains and whilst I am not generally a fan of the roast lunch, this is what you have when you go to a pub on Sunday in the UK.  The meals were large with an assortment of veges as well as the obligatory batter (Yorkshire) pudding and a small ball of stuffing.  The batter pudding was particularly light and crunchy and the parsnips were a revelation, caramelied and crisp and for the first time I can say that I truly enjoyed a parsnip and wished there was another on the plate.  The potatoes were good also, roasted in goose fat to make them incredibly crunchy.  Many delis and providores sales doubled or sold out of goose fat when Nigella demonstrated it’s use in a Christmas show a few years ago.  It may be considered ‘old hat’ now but it’s still unexpected to find such good potatoes in a pub in a small village.  Again, I was compelled to eat two halves, which is double my usual in take of potatoes. 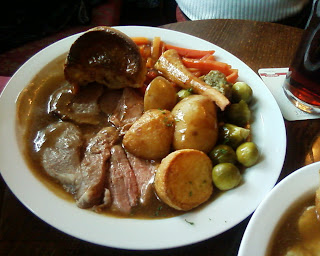 The rest of the meal was enjoyable and plentiful to the point of almost overflowing from the plate.  The Lamb lacked it’s promised mint sauce and the Pork did not come with it’s advertised apple sauce and crackling.  I suspect that this is down to the waiting staff forgetting to pick up the accompaniments as they delivered the plates.  It’s an indictment on us as diners that the recent period of record low unemployment have reduced our expectations of service so that we come to accept these types of small mistakes as the norm.

Despite the niggles about what was advertised and what was delivered, the visit to the pub made a great afternoon walk between snow showers and was good value with two courses costing 10 pounds. 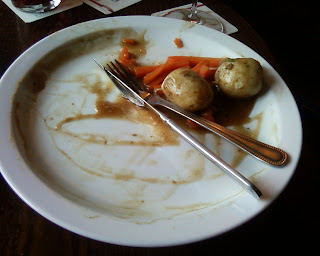 Next post: ¿How Do You Say Chocolate in Spanish?