¿How Do You Say Chocolate in Spanish?

If there´s one thing that´s certain, it´s that the Spanish have a sweet tooth.  Everwhere you look there are Pasticceria selling cakes, cookies, doughnuts, chocolates and ice cream.  On every other corner is an El Rincion, shops selling vast arrays of lollies and candied nuts.  And, there appears to be a national obsession with chocolate.  The Spanish of course were the first Europeans to savour chocolate as they cut a swathe through South America and they certainly enjoy it in all it´s forms.

I was determined to try the famous Churros and (hot) Chocolate when I visited Madrid.  The quality of both Churros and Chocolate varied wildly and my first serve was very disappointing.  The Chocolate was watery and the Churros were cold and fatty.  I knew that I (& Madrid) could do better and as the days progressed, I watched where the locals were going and what they were ordering.  My second sample was a vastly improved Chocolate, thick and bittersweet (but out of a packet) and the Churros were still cold and oily.  Surely this could not be the combo that everyone was raving about? 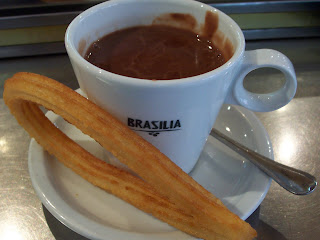 Finally, just around the corner from my hotel I found a place that not only prepared the Chocolate from scratch (rather than out of a machine) but also prepared the Churros fresh to order.  The combination was fantastic and I can understand why it´s a breakfast staple – although I enjoyed mine at 4pm.  The side serving of cream was an added bonus and I was glad that I was sharing my serve with Anthony as it would have been too rich and sweet for me to finish (I can hear you all gasping in horror).  Most of the locals seemed to be able to polish off their serves just fine.