on January 29, 2010 by Fiona Ryan
Filed in: Restaurant Review, Travel 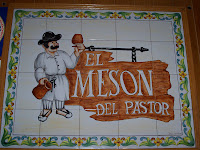 As you know, Spain is the home of Tapas and one of the old standbys are Croquetas.  They come in all shapes and sizes and, just like any menu staple, vary wildly in quality (think hot chips or fries and you’ll get the drift).

For the unitiated (and it must be said, disadvanatged), Croquetas are croquette shaped snacks that are lightly crumbed and have been pan or deep fried.  They are normally filled with a potato puree or stiff bechamel and Manchego Cheese combination as well as a variety of additions including that old fave, Jamon as well as more exotic ingredients such as Smoked Eel.  They are served hot from the fryer as a bar snack.  Really good Croquetas are home made, piping hot, smooth (but not necessarily creamy) in texture and crunchy on the outside.  Again, just like hot chips, really bad Croquetas are straight out of the pack, into the deep fryer and over cooked.

Until I tried the Croquetas at El Meson Del Pastor in Morella, the best ones I had tasted were served at MoVida in Melbourne.  They were absolutley silky smooth with just the right amout of cheesieness and were a complete revelation.  They were so good that after a few moments umming and ahhing, we ordered a second serve. 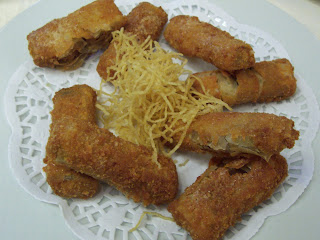 The Croquetas at El Meson Del Pastor were billed as ‘Nearly Liquid Partridge & Wild Mushroom Croquetas’.  I wasn’t sure what to expect but I knew they would be good.  When they arried, the (many) Croquetas looked like Spring Rolls that had cracked whilst being cooked but there the similarity ended.  These were crisp and easily broken with a fork.  The filling was a stew of shredded Partridge and Mushrooms – nearly liquid.  Each mouthful was a crunchy, savoury morsel and although it was a generous serving, I easily polished them off.  They might not look like much but that’s more to do with the photographer than the chef.

So, are the Croquetas at El Meson Del Pastor better than the ones at MoVida?  Of course, the El Meson Croquetas were a new experience which was vastly elevated by dining in such a great enviroment but the MoVida Croquetas were divinley smooth and are a few thousand kilometres handier to Camp Hill.

I’m afraid it will have to be a tie.  They were just too different to compare.