on February 13, 2010 by Fiona Ryan
Filed in: Food Experiences, Travel

Last Monday I visited Blackfriars Distillery in Plymouth – as you do when you have a spare Monday morning.  It’s located in the ‘Barbican’, which is the old part of Plymouth.  When I say old, think of the Pilgrims heading the to New World.  The Barbican is where they jumped on board the Mayflower and set sail for a world of adventure, pumpkin pies and tea parties.

Blackfriars Distillery may not ring a bell but when I say ‘Plymouth Gin’, you will be grabbing the ice cubes and tonic.  There are many Gins in the world (as I can attest) but there is only one Plymouth Gin.  There have been many, many pretenders and each time, Blackfriars Distillery have won their argument that they are the original and true Plymouth Gin.  In the end, the judiciary became tired of the never ending litany of litigation and declared that ‘Plymouth Gin’ must be made within the bounds of the Barbican (which is why it is still made there today).  In these modern EU times, Plymouth Gin has further benefited by being granted an Appellation d’Origine Controlee, which designates the area a product is produced in.  Whilst there are many olive oil and wine growing regions, not surprisingly, Plymouth Gin are the only Gin producers in the world to have been granted this guarantee of authenticity and quality.  It’s a Champagne accreditation for a Lush’s lifestyle.

The tour itself was just over half an hour and unlike other brewery tours, was contained to just one room, the distillery.  After touching the metal bar as we entered, lest we bring in a static spark and set the atmosphere alight, we were shown the various dry botanicals that make up the Gin and encouraged to crush, sniff and taste them in their raw form.  The mix in Plymouth is Juniper Berry, Coriander, Orange & Lemon Peel, Cardamom, Angelica Root and Orris.  It’s blended with pure Dartmoor water and placed into giant copper stills dating from 1855/6.  Whilst not the the originals, they are none the less impressive when you think that once or twice a month, the Distillery still hand loads the botanicals into the water and alcohol mix and distil the Gin on site.  It only takes around 8 hours to distil 9000 litres of Gin and unlike Whisky, it needs no maturation in vats or casks.  Great for when you are having a party of a Saturday night.  So, it’s straight off to bottling, which is no longer on site.  There was the obligatory taste test, served with water and was surprisingly sweet rather than mouth puckering, which is what I expected.

The tour wound up with the complimentary cocktail or miniature for the driver, in the Plymouth Cocktail Lounge.  An absolutely fabulous venue which is actually an old refectory from an old monastery.  There were also discount vouchers for the shop but truth be told, it’s cheaper to buy Plymouth Gin at the local ASDA than it is at the distillery.  For 6 pounds, it was a very pleasant way to spend an hour or so. 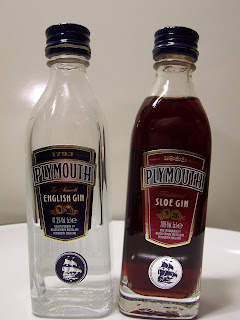 By the way, the best Gin & Tonic I have ever had still remains the enormous one served in a stainless steel beaker, on board a tiny tinny as we lazily circled around the top of Victoria Falls, on the Zambesi, as the sun set.  I know it all sounds very jingoistic but there you have it.