I mentioned in my travel blog about our visit to the Champagne region in France.  We stayed in Epernay, home to many of the big Champagne Houses but also a centre for many smaller producers.  At 25 000 people, it’s a lot more manageable than Reims (but a darn site bigger than Tanunda). 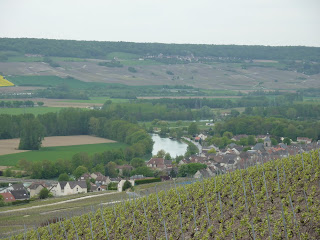 Our stay in the region included a visit to Hautvillers where Dom Perignon is buried, a cellar door tasting at JM Gobbilard & Fils, a drive through the Champagne Route Touristic, a walk along Ave deChampagne and a visit to the subterranean cellars of Mercier, one of the big Champagne Houses in France and an absolute nobody to us.  It appears that 90% of Champagne produced is consumed by the domestic market.  It’s only the really big names and multi nationals that bother or can afford to export.  And believe me, as we drove around Epernay, there was literally a producer on every corner, crossroad and at the top of every hill. 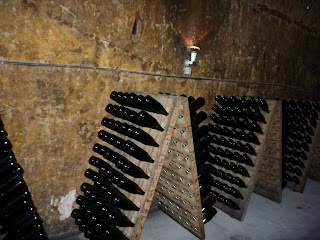 Mercier has been going for 152 years, started by the visionary Eugene Mercier when he was only 20.  Well known for their exploits to draw attention to their product, publicity stunts have included a car rally in the caves where the Champagne is stored (and not a bottle broken) and organising wine tasting in a balloon above Paris during the 1900 Paris Exposition.  As you would expect, the cave tour is no run of the mill wander around the underground cellars.  After watching a video about the history of Mercier, we descended in the ‘Panoramic Lifts’ with vignettes on wine making throughout the ages viewed through the glass wall of the lift.  It was like visiting the Myer Christmas windows, complete with popping Champagne cork sound effects. 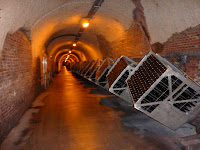 Arriving at cellar level, the temperature was decidedly Champagne chilly as we hopped on board a miniature train that took us zig zagging through the working cellars.  A commentary was provided by a girl with a very English/French ‘oh ho ho’ accent. We saw Champagne being cellared and in reumage (tilted so the sediment lodges in the neck, ready for disgorgement) in the hand carved chalk caves, some as old as 150 years.  The cellar is divided into avenues, the longest being Avenue de Pekin, so called because it is over 1km long and workers considered it to be so long that they may as well have walked to China.  Along the way our guide provided factoids on Mercier and Champagne production.  At the end of our cellar tour, we ascended in a delicate bubble rising to the top and entered the sampling area.  A glass of Mercier Brut and a wander around the boutique completed the tour.  Not too shabby for 9€. 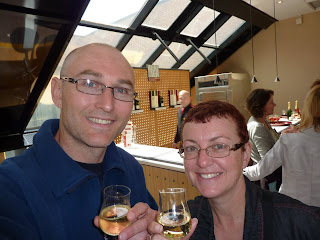 Above ground, Ave de Champagne is also home to Pol Roger, sadly closed on the day we visited as it was Labour Day – damn those Socialist Frenchies!  Möet & Chandon are also on this Avenue but their tours were booked out and quite frankly, as part of a huge multi national conglomerate, they lacked the individuality of Mercier.  Their pricing was over the top as they know that can get away with charging the descending hordes ridiculous prices for their tours and products (though kudos to them for being open on a public holiday). Cheers! 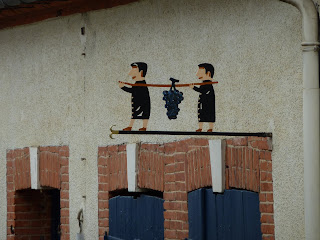 Next post: Turkish Delight – The Spice Bazaar in Istanbul

Previous post: It’s not all bad on the cross Channel ferry