Over a Tuscan BBQ

As you know, I have just returned from a week in Gaiole in Chianti in Tuscany.  It was a low key affair but we still managed to drink 2 bottles of champagne, 7 bottles of red wine, 2 of white, a few beers, countless wine tastings and a bottle of vodka between the three of us.  What did we do to soak up all of that alcohol?  Well, eat of course. 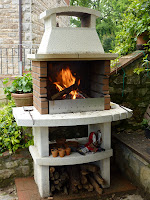 As the week progressed, the days warmed up so one evening we fired up the barbie and enjoyed and al fresco meal of local produce.  Whilst we were waiting for the flames to die down, I made the best bruschetta I have ever tasted.  One of the things that made this bruschetta so good was the quality of the Ciabatta from the local grocery store (there was no bakery – just daily fresh bread at several stores in the town).  The loaf had the typical dense, chewy quality but had a large crumb and no salt – which is how Ciabatta is baked in Tuscany.  It is salt free to allow the other flavours to shine.  It was the culmination of a cooks dream – rather than watching Jamie bang on about chewy Italian bread and charcoal flavours, only to be disappointed with bread from Brumby’s or drool as Maggie drizzles toasted slices with olive oil and rubs with garlic, here I was, in Tuscany, actually making the genuine article.  No toppings, just oil, garlic and salt and straight into our mouths. It was bloody delicious! 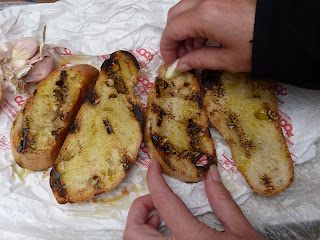 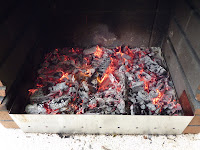 Once the coals were glowing, it was time to put on the grain fed chicken marinated in oil, garlic, rosemary, pepper and salt and some orange zest.  These were the yellowest, plumpest chickens I have seen in quite a while and they sizzled on that plate!  We also had a few Italian pork sausages for good measure (although I could not locate any Cottechino) and of course, fried onions.  Sean had made an Eggplant Caponata the day before so we had that as a very tasty accompaniment. 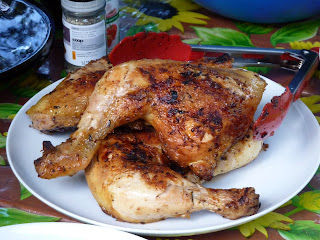 A simple green salad with fresh Buffalo Mozzarella, local olive oil and balsamic, washed down with lashings of Chianti (no Fava Beans) made sure that this will be one of my the most memorable BBQs. 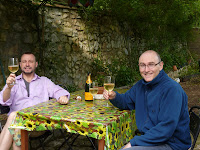 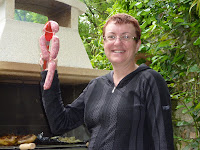