I think the title says it all.  Yesterday we visited the quaint Medieval town of Gruyeres, perched on the side of the steep pre alpine hills in the Canton of Fribourg in Switzerland. 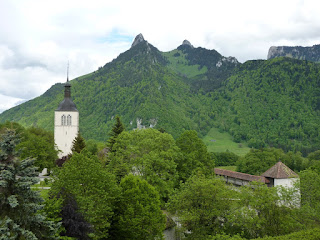 Yes, Gruyeres is famous for it’s cheese (it’s not Swiss Cheese – that’s Emmental, another area near Bern) but we opted for the other gourmet souvenir that’s available at every restaurant, cafe and gift shop.  The Meringue.

We opted to buy a pack of the plain meringues although the Vin Cuit (Pear Syrup) flavour was also tempting. In this region (and most of Switzerland), they are served with lashings of thick cream, known as La Gruyere Double Cream so we also bought a little tub of that.  Incidentally, the name Gruyeres is believed to be derived from the French word for crane which is ‘grue’ which is why they adorn souvenirs from the town.

Back home, a couple of meringues, a dollop of cream and some strawberry coulis on top turned these ingredients into a little bowl of heaven.  Gently crushed and mixed, this would be known as Eton Mess so perhaps when we next have it on the weekend with guests, we’ll call it Alpine Crush.