Croatian & Bosnian Food – Not For Vegetarians!

Here I am in Croatia and I barely have time to post anything between maintaining my two gelati a day habit formed since this heatwave began in Italy and stuffing my face with every type of sheep cheese you can think of.  One thing is for sure, like most of Europe and the Balkans (and the rest of the world for that matter), it’s slim pickings for the vegos!

Croatia is an interesting place to visit from a gastronomic point of view as there is so much ‘overlap’ evident from neighbours and former occupiers.  The Istrian Peninsula (Istra), where I spent a week is bordered by Italy and has been under both Venetian and Italian rule at one time or another.  Rice dishes are shared as well as sharp cheeses and air dried ham.  In Italy is would be Prosciutto but in Rovinj it’s Istarski Prsut and they are very pedantic about telling you that their ham is dried by the cold Bura wind with no smoke.  Further south, they cure and smoke the ham and it’s known as Dalmatian Prsut (obviously they’re not as puritanical in their ham curing as the Istrians). 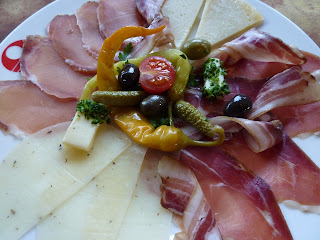 Lots of seafood of course.  Dalmatia is famous for it but Croatia is mainly coastline so there is good seafood the length of the country.  Shellfish, octopus and squid are hugely popular (with me at least) and ‘catch of the day’ truly is catch of the day.  If there is an archetypal seafood dish, it’s probably Black Risotto made with Squid Ink.  Strong links again to a similar dish in the Veneto. 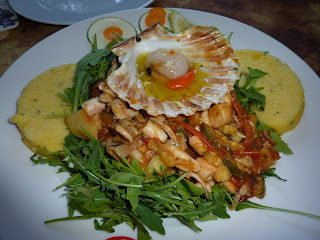 Looking at other influences, there is the Cevapcici which are tasty little grilled beef of veal sausages without a casing that you can sample at your own local Coles or Woolies.  These are widespread throughout the Balkans and also coming in rissole form (cue quotes from ‘The Castle’) with links to Austro Hungarian cuisines as well as the Ottomans.  Lamb is very popular and whilst pork gets a bit of a look in, a history of Muslim communities means that beef and veal are much more common.  At a Bosnian restaurant we visited, where the population is predominantly Muslim, their pork mince substitute was Turkey.  This happens to be the exact substitute I use in Australia as it tastes almost identical to pork and much lower in fat – very successful in Thai and sausage rolls.  Ottoman and Greek influences are also evident in the snacks of flaky pastry Burek (cheese, spinach, meat) that can be bought from the Pekarna (bakery) for a few Kuna.

Grocery prices are generally cheaper than other parts of Europe and fresh meat is a third of the price eg: chicken breast $5 per kg.  Fresh fruit and vegetables are still quite seasonal with local producers supplying the market but ‘foreign’ fruit and veggies from Spanish hothouses are starting to creep in.  Typically Mediterranean crops of olive and citrus flourish in the stony ground and baking sun and masses of figs grow anywhere the fruit has dropped.

Around every bend someone is selling grappa or brandy from a little table underneath an umbrella, set upon the side of the road.  The competition is fierce and on busy stretches of road, there are stalls every few hundred metres.  We enjoyed some home made grappa mixed with Med (honey) offered by a waiter at one of the campgrounds we stayed at – it was a potent mix and we were lucky we only had to walk back a few 100m to the tent.  It goes without saying, that alcohol is cheap here as it is in most of Europe and the wine is good but is rarely seen outside the domestic market. 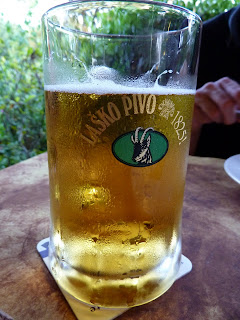