A few of my favourite things

It’s nearly time to to leave This Sceptered Isle and squeeze myself into a sardine tin for the long haul back to Australia.  This last week is a chance to re-visit some new favourites, before supply is cut off.

Fig, date & grains bio yoghurt – the name says it all really.  This delicious Morrisons own brand yoghurt is fantastic with fruit for breakfast and only £1 for 500g!

Irish potato farls – flat pancake like bread made with potato.  The serving suggestion is ‘pan fried in butter as part of a hearty cooked breakfast’ but I just enjoy them toasted with a slight smear of butter (would be even better with Vegemite).  These make a nice change from toast with soup, for lunch.  Tesco sells 6 for only 49p but they have 17% fat! so I opt for the more health conscious (but pricier) Rankin farls at only 1.7% fat. Four thicker and slightly larger than the Tesco farls for £1.51. 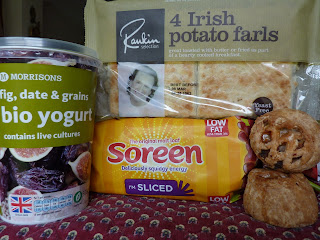 Soreen – sounds like a cold sore cream but is in fact a sticky, low fat malt loaf with the catch phrases ‘The secret’s in the squidge’ and ‘Deliciously squidgy energy’.  It is indeed delightfully squidgy, though almost impossible to cut into neat slices. Soreen have dealt with this by introducing the new sliced loaf.  A mainstay of ramblers, campers and grandmothers, it’s great plain or toasted with butter but I’m drawing the line at some of the suggested recipes on their website – Spicy Malty Pork Quesadillas anyone?

Morrisons Cheese & Pickle mini pork pies – I have tried many variations of the pork pie in the last 18 months – giant, medium, small, Branston Pickle brand, Melton Mowbray, cured, uncured, spiced and other cheese and pickle versions.  As far as I’m concerned, Morrisons are the best so I have stopped buying other versions and just stick to these. Six of these tasty morsels costs £1.79. One of these also goes well with a lunchtime bowl of soup.  Unfortunately, there are very few Morrisons in the south-east so on a recent trip to Plymouth, I bought one last batch – only 4 left! 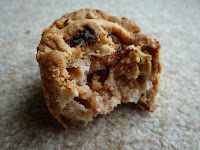 There are two things that will keep me going on that flight.  1. A chance to sample the multitude of Asian delights during our stop over in Singapore. 2. Vegemite – sadly, our jar ran out at Christmas and though you can buy it in any supermarket, I thought I could make it until I arrived back in Australia.  Mother’s milk.

Next post: Did I ever tell you what happened to the Sloe Gin?