Finally, after 18 months of travelling and collecting like a magpie and 4 long months in transit, the boxes that we shipped from the UK have finally arrived.  After putting away the clothes and books, I couldn’t help but notice that a very large proportion of the items were food related.  The Op Shops were irresistible in the UK and there were some absolute bargains – an old fashioned glass jelly mould for £1.95, a Nigel Slater cookbook for 80p, a set of retro espresso cups for £2 and a melamine picnic set for £3.

As always, I gravitate towards linen with luxurious tea towels from Spain and France, a beautiful hand worked table runner from Croatia as well as a hilariously tacky bar towel from Benidorm with a recipe for Sangria printed on it that is sure to show up at the next backyard party.  Vintage cutlery and serving ware from shops and markets in the UK, covered eggcups from the Brittany ferry, a kilo of Gros Sel De Guerande (coarse French grey sea salt), cookie cutters from Berlin, a Parmesan grater from Tuscany, Rick Stein’s Mediterranean Escapes cookbook (only £6 from WH Smiths) and the items I have been waiting on the most, my gorgeous bowl and mini tagines from Morocco.  Slightly knocked about but still in good working order. 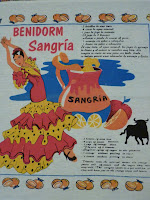 I’m having a cupboard re-organise today to try to squeeze it in.  Plenty of room still in the linen cupboard but the others need some serious sorting.  Try as I might, the discipline I have in clearing out clothes and bric-a-brac is not so readily applied to crockery and books.

Next post: It’s all about the Cheese – Rhone Valley