It’s all about the Cheese – Brisbane Cheese Awards

on June 6, 2011 by Fiona Ryan
Filed in: Brisbane, Food Experiences 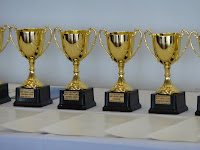 As mentioned a few posts ago, I was invited to the Brisbane Cheese Awards breakfast at Portside on Sunday along with the producers, luminaries of the industry and other Brisbane food bloggers.  It was a casual stand up affair of pastries, coffee, fruit and juice for around 60 people with a punishing Sunday morning 8am start.  I attached myself to a group of bloggers and met some a couple of the bloggers I follow including a fave ‘Eat Drink and Be Kerry’. Sadly, Barbara from Winos and Foodies was not there. By 9am, the awards and trophies were announced, with the exception of the ‘Best Qld Cheese’ and the ‘Lord Mayor’s Cup’ and it was time to move on to some cheese sampling.

They were already queuing to get into the Peoples Day event, where we had complimentary entry a freebie of Divine Dairy Bio Dynamic Feta.  There were over 20 stalls to work through so we headed straight to the far end with the idea of working our way back to the entry. 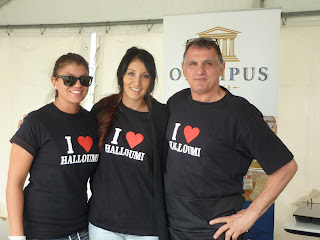 I was thrilled that the first stall we came to was Olympus Cheese.  I am a big fan of their Halloumi, made just down the road from me at Coorparoo.  It’s too delicious,  precious and pricey to share with cheese philistines so only the ‘inner circle’ are ever offered the real deal.  A favourite Friday night ‘wind down from work’ treat is some slices fried in the pan with a squeeze of lime, a lick of chilli and a nice crisp white wine.  When I hear ‘food hero’, I think of people like those who run Olympus. Springing from a family business, they are still local producers who not only make fab halloumi, but are relaxed and convivial and very happy to talk about their products.  The range includes plain and flavoured ricottas and fettas and I would commend anyone to seek their products out at local deli and fruit shops.  As an added bonus, there was a big special on the halloumi, so we stocked up for all those Friday nights ahead. 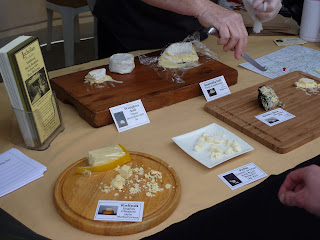 Local producers were slim on the ground but represented by Kingaroy Cheese, Emmos Fine Foods from the Lockyer Valley with their wonderfully named Nannybert and Towri Sheep Cheeses near Beaudesert.  Other artisans had come further afield but were no less delicious.  Particular favourites were the Divine Dairy Blue,  Yarra Valley Dairy Persian Fetta and Jindi Triple Cream Brie – still winning medals and you can see why. The Udder Delights Chevre was delicious and incredibly good value at $8 for 200g so that was slipped into the dilly bag.

By midday, the crowds had swelled and the queues for each stall snaked around but thankfully, our cheese lust was well and truly sated. Winner of the ‘Best Qld Cheese’ was Witches Chase Cheese Co for their LI (Labour Intensive) Washed Rind and the ‘Lord Mayor’s Cup’ went to Jindi for their Old Telegraph Road Heritage Blue.  The People’s Day is a work in progress (more seating and shade needed) but if you are in any way interested in cheese at all, it’s worth a visit next year. 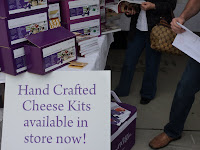 Lots of links in this post, I know but then, there were lots of great cheeses!