on September 4, 2011 by Fiona Ryan
Filed in: Brisbane, Restaurant Review

It’s hard to miss.  Stretching over a hundred metres down the block, the queue for sushi from LR Sushi rivals the banana queues at the City Farmers Markets.  But there’s no shortage of sushi in Brisbane and not even a shortage of sushi on the block, yet there is massive queue every day from 11am right through till after 2pm and then again from around 4pm (commuting diners?) 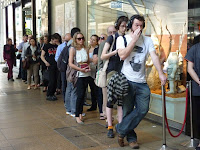 LR Sushi has been located in Queen’s Plaza since it opened in 2008 and was popular right from the start.  The idea of being able to buy something quick to eat without fighting your way through a food court is obviously appealing.  From time to time I had seen devotees queuing for sushi at lunch.  But now, the queue has formed to monster proportions.  It often trails all the way down to the corner of Edward & Adelaide Streets.  LR Sushi has had to install a velvet rope and concierge system at lunch time to make sure people don’t queue across the doors of shops beside them. 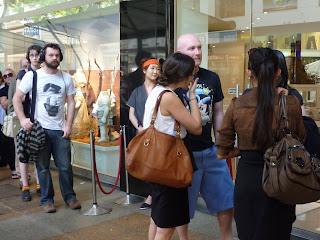 Why do they come?  I’ve tried the sushi from LR Sushi and it’s OK.  Not bad, not the best sushi I’ve ever tasted but fine.  The rice could certainly be better seasoned.  The reviews online are always positive and colleagues tell me they go there because it’s fresh.  However, because it’s so busy at LR Sushi and they need to keep up with the demand, sometimes the rice is still warm in the sushi rolls.  That’s a little too fresh for me.  Sushi should be chilled or at room temperature – not warm. 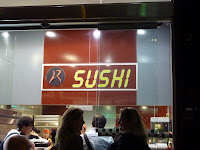 They come because there’s a queue. If there’s a queue, it must me good.  So now,  LR Sushi is destination dining rather than just wander past snacking.  There are other locations dotted around the city so I can only guess at the queues in these locations (MacArthur Central, Felix St).  Other vendors would kill for such dedicated patrons. Who wants to queue over their entire lunch hour to buy some $2 sushi?  That’s just crazy people! I have better things to do with my lunch break.  Besides, I know that there’s a no name sushi shop directly opposite my building at 149 Adelaide St, that has fresh, hand made sushi every day with no queues whatsoever.