on October 11, 2011 by Fiona Ryan
Filed in: Brisbane, Restaurant Review

To blog, or not to blog?  That is the question.  I wasn’t going to blog about this dinner because it’s not really a review of a restaurant or the wine is it?  On the other hand, all my friends were there and we had a great time so I thought it would be nice for them to skip down (a hazy) memory lane.

We are all firm fans of Charles Melton and spend copious amounts of money at his cellar door when we visit the Barossa Vintage Festival, every two years.  Not content to get mega bucks from us at Easter this year, Charlie put on a wine dinner at e’cco a few weeks back and we just couldn’t say no. 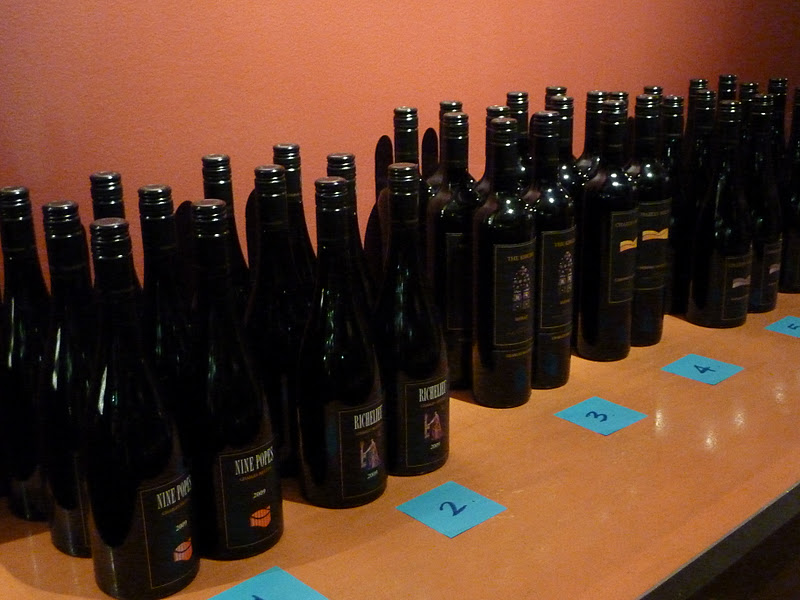 The meal was degustation style, showing off dishes from various aspects of the menu.  Before the mains, there were pre-dinner drinks with some delightful nibbles including Tempura Oysters with Nahm Jim.  I like shellfish and even enjoy mussels, something many people don’t eat but I am no fan of oysters in any of their guises.  These oysters though were very moreish, hot and crispy with a sharp dressing.  I’m guessing that the next time I am offered an oyster, it will probably not be as good but I enjoyed the treat none the less.

We were seated and a series of dishes and copious amounts of wine were delivered to the table.  The Corn Fed Chicken was good but didn’t dazzle. I liked the Harissa Sauce but others found it too overpowering and intense (though not too hot). I was surprised by the generous size of the dishes – Not quite full size?  Maybe 3/4 size?  Definitely not tiny degustation morsels.  This meant that by dish number two, the Tonka Bean Spiced Pork, I was already limiting myself to just the meat component.  You’d think we’d be over Pork Belly by now, but it appears we aren’t.  So as long as it’s tender with crunchy crackling, we are happy to keep enjoying it and restauranteurs are happy to claw back some money on cheap cuts to make up for the more expensive ingredients, such as the next dish. 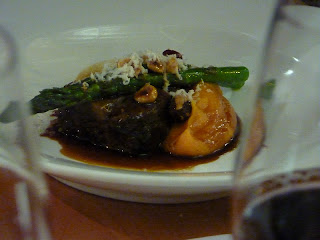 When the Red-Wine Braised Wagyu Beef Cheeks arrived, I was quite full.  Those Beef Cheeks were very good though.  I cook with them a lot and know that slow braising works a treat but these were amazingly tender, able to be flaked with just the merest touch of a fork.  The Fresh Horseradish that accompanied them was a treat. 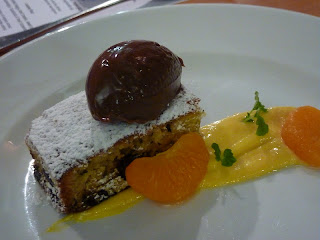 By the time the Sour Cherry Tea Cake arrived, I was almost defeated and I thought the cake a little dry.  A sentiment echoed by one of my friends.  This didn’t stop anyone finishing their fifth course and then moving on to the petit four.  It’s been absolutely years since I have been to e’cco and I can tell you that Philip Johnson is still turning out high quality food.  It was particularly pleasing to see him cooking and at the pass on the night. I think though, the competition has become a little more fierce in the last few years as Brisbane jostles for foodie status.  None the less, it’s still in Gourmet Traveller’s Top 100 Restaurants and one of only 9 from Queensland. (How in the world did Absynthe get onto that list???)  No mean achievement to geton the list when you consider the number of fine dining restaurants in Brisbane alone.  It’s worth a visit. Service too is top notch.

As you would imagine, the wines of this occasion were absolutely superior and matched to the meal.  I’m not a fan of the sparkling, but as Charles made excuses for in his speech, it’s a frivolous tipple and not to be taken seriously.  The 2009 Richelieu Grenache was excellent and the 2009 Cabernet Sauvignon also stood apart from the Shirazs.  Have no fear Charlie, we’ll be back at the cellar door in 2013. 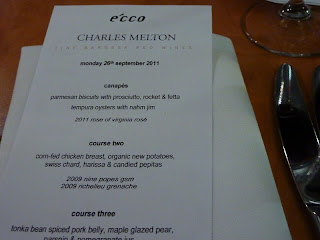 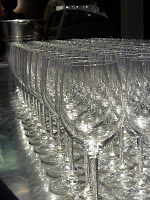 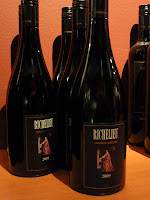