on October 18, 2011 by Fiona Ryan
Filed in: Restaurant Review

One of the things that I missed most when we were travelling in Europe were Asian flavours.  After only 2 months in Birmingham, I was so desperate that we hunted out the very small Chinatown for some smoky Char Kway Teow and Salt & Pepper Calamari.  In Berlin, we had 3 separate meals at the same Vietnamese restaurant and in Switzerland, I paid an absolute fortune for a few small chillis and some coriander.  I knew Asian flavours were part of every day life in Australia but I never knew how ingrained they had become.  That Phở in Berlin was like mother’s milk. 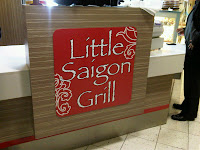 I’m still topping up on those flavours so was delighted to discover Little Saigon Grill in Rowes Arcade in the City.  The menu board bore little resemblance to the food on offer but everything in the bain marie looked scrumptious including Lemongrass Pork and Beef.  In the cold section there were the biggest cold rolls I have ever seen in various flavours (chicken, prawn etc) and the traditional Vietnamese salads, made to order by the brigade of staff (more than 8), all busily preparing and serving. 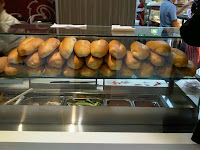 But for me, I was curious to know what people were queuing for and then transporting away in paper bags.  I asked, ‘What are those bread rolls?’. The answer was unintelligible (to me at least) but I knew they were good as there was a crowd.  I ordered one and waited.  As it was prepared before me, I realised it was Bánh mì, a popular street food in Saigon and elsewhere in Vietnam.  The roll was large, crusty and super fresh.  The filling was crisp and flavoursome with cucumber, carrot, noodles and lot of coriander.

The first few time I had a roll, it included a pastrami style meat, the most recent visit was a deli pork loaf.  Of course, it really should be a smear of French inspired Pate’ and some pork belly but hey, they gotta make a profit somehow.  The roll is finished with a sweet, tangy dressing.  I always order chilli sauce so was surprised on my most recent visit to have no chilli sauce but giant pieces of scorchingly hot chilli that I had to remove.  They still packed quite a punch on the bits of salad they had touched.  So, it would seem that consistency may be a bit of an issue but only as far as general make up of the roll, not in terms of quality.  For $5.90, your not going to get a fresher or more palate pleasing lunch in the CBD. 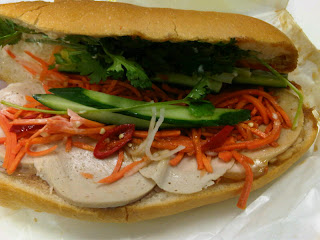 I keep saying I’m going to try the the Lemongrass Pork in a roll, as I have seen others ordering but as yet, I have not been able to give up my love affair with the Bánh mì.