OK – last post for the year so I want it to reflect holiday spirit and Summer fun.  Here we go…. 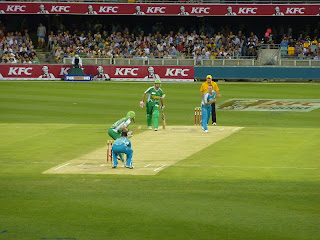 I love chips.  Love, love, love them.  So, I never buy them because they wouldn’t stay in the cupboard long and they’re just so bad for you (but delicious!).  I made a rare impulse buy the other day and succumbed to a packet of Smith’s Vegemite Chips.  I was intrigued to think what a Vegemite chip might taste like and have to admit that at the special price of 50c per pack, it wasn’t going to be much of a splurge.  They sat in the cupboard for a week or so because I needed a reason to open them.  That reason came on Tuesday night when we went to that great Aussie event, the T20 Cricket Big Bash at the Gabba. 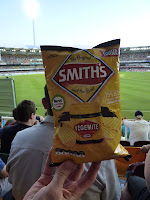 We cracked them open and had a taste.  They tasted like…..Vegemite!  Like a crunchy biscuit with Vegemite.  Considering some of the weird fake flavourings that go into chips, these were remarkably good.  It didn’t take much to finish the bag between us. The verdict from Anthony was ‘more-ish’.  From me ‘six!’.  Liz Hurley had no comment.  I must admit that I am keen to buy another packet and try a few on a sandwich with some cheese – takes me back to Freer’s Red Seal Tomato Sauce Chips on a buttered bread roll in highschool.

So, if you see a packet in your local Coles or Bi-Lo (only) I’d recommend buying some.  It doesn’t say ‘limited edition’ on the pack but best to grab some while you can.

TIFFIN is taking a short break to read all of those cookbooks! Thanks for reading in 2011 and I see you again in 2012.