on January 6, 2012 by Fiona Ryan
Filed in: Brisbane, Restaurant Review

In 2010 I spent two separate months in Spain, travelling from north to south, east to west, avoiding a lot of the coast and spending a considerable amount of time in interior.  In that time, we encountered only one place where Tapas was still served in the traditional manner.  That is, a small bite or offering that accompanied your drink at no extra charge.  That place was Granada.  With the Alhambra Palace looming above, the small streets of the old quarter are lined with bars, competing for your Euro with tempting Tapas to accompany drinks.  Some portions were generous and there came a point quite early on that we stopped saying yes to anymore Tapas.  A tiny bar that had been operated by the same family for eons served up the hit of the night – a small dinner roll filled with tiny, fresh broad beans cooked in a garlicky sauce.

Fast forward to exactly a year later and I found myself at Granada Cafe Tapas Bar in South Brisbane.  Tucked away on the ground floor on a nondescript office block, halfway between Southbank and West End, the Plain Jane (Juanita?) exterior belies the traditionally tiled Spanish Bar interior.  We were greeted  by a friendly staffer who seated us, offered water and took us on a quick tour of the menu.  There are the smaller, individual tapa, the mid sized raciones, a few mains and some blackboard specials to round things off.  The only thing to do was order a couple of Sangrias (Happy Hour price of $5 between 5 and 6pm) and plunge in. 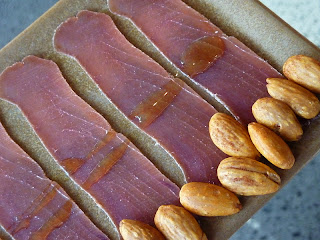 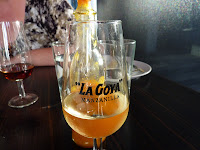 The standout for me was the first dish I ordered from the specials board of Air Dried Yellowfin Tuna with Almonds.  Presented with a drizzle of olive oil, the slightly chewy tuna had the appearance and texture of air cured jamon with the faintest trace of tuna flavour.  Wrapped around a warm almond, it was a perfect starter and a great accompaniment to the Manzanilla Sherry.  Jenny’s more avant garde Pork Belly Taco on traditional corn tortilla looked divine but I was too busy talking and scoffing to have a taste.  She told me it was a must order for next time.

All the usual suspects are there – both the Espinacas and the Jamon & Queso Croquettas were crisp, hot and creamy but the spinach was the superior of the pair, with a discernible fresh spinach taste. The cheese in the Jamon & Queso had an almost fake cheese flavouring taste to it, reminiscent of a Findus Crispy Pancake. 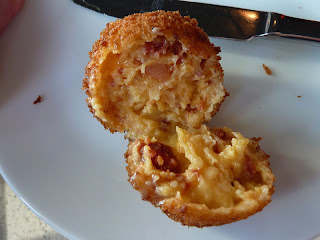 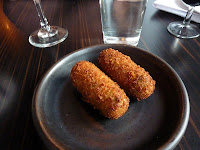 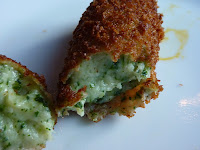 Still, it didn’t stay long on the plate.  Braised beef cheek Empanadilla with a wonderfully short crust pastry followed by the peasant dish of Migas, translated literally as ‘crumbs’ but this time with a decidedly bourgeois accompaniment of scallops.  Along the way, we shared a bottle of 2006 Altos de Tamaron Crianza and rounded out the evening with the much written about Churros.  These were in the same thin style as the bars in Madrid but thankfully, fresh and hot, not cold and greasy like so many disappointing churros in Spain. 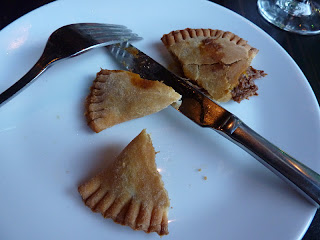 It wasn’t cheap but I would rather pay for freshly prepared food than for something that’s been sitting uncovered on the bar all day and reheated in the microwave when you order it.  This is sadly, the most likely scenario in most of Spain’s bars.  I had wisely booked for a late afternoon catch up and I suggest you do too as the place was heaving by 6pm.  None the less, service was friendly and efficient and as the night got busier and the bigger groups arrived, we were not forgotten. With so many more items on the menu to try (the Mejillones Rellenos sound great), I will definitely be back, even if it’s just for the $5 Sangria. 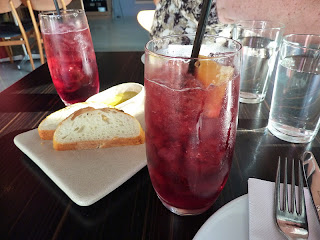