on January 14, 2012 by Fiona Ryan
Filed in: Brisbane, Restaurant Review 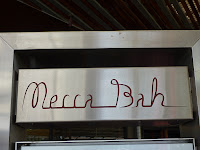 Christmas was coming, most people had already headed off on holidays so the three Amigos decided on an impromptu lunch at Mecca Bah.  It had been a dozen years or more since I had visited but somewhere in the back of my mind, a little voice was saying ‘There’s a reason you haven’t been back’.  I couldn’t quite recall the reason why.  The no booking policy?  Perhaps but in this instance, I was prepared to ignore this as if it was busy, there were plenty of other options around.  It was busy when we arrived but Mecca Bah has a huge dining area that was only half full so there was no trouble getting a table.  I made my meal selection based on the plates on other diners tables – the battered mussels looked irresistible. 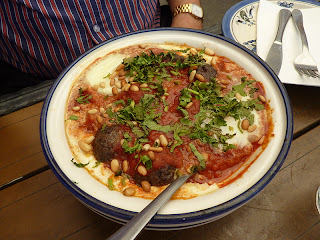 Drink and food orders taken, we kicked back to chat and await our meals.  Unfortunately, that waiting took quite a long time.  I saw another table seated and their delicious looking Pide arrive. I couldn’t be certain that they hadn’t pre-ordered as part of a Christmas party.  Plenty to chat about but we were starting to get hungry.  Pide dispatched at the next table they were getting ready to leave.  Meanwhile, the shared entree of the two bright young things on the other side of us arrived.  ‘Mmm’ said Amigo 1, ‘I remember the food taking ages when I went to the Mecca Bah in Canberra’.  ‘Sorry’ said Amigo 2, ‘Why did you suggest this place?’ An hour after we had ordered our meals, Amigo 3 asked the waitress ‘Where is our food?’. She looked at us with large blinking eyes like it was the first time she had seen us.  It was like Harry Potter’s cloak of invisibility had been whipped off to reveal us.  Hadn’t she seen us lounging around on the banquettes for the last hour with cutlery still wrapped in serviettes, sitting atop clean plates?  Apparently not, as the first words out of her mouth were ‘Haven’t you had your meals?’.  She apologised and wandered off a little dazed and perplexed to the kitchen.  Even more perplexing was the fact that our meals arrived with another apology less than a minute later.  Where had they been?  I could see the pass and they certainly hadn’t been sitting there.  They were hot and fresh so it’s still a mystery to me and my waitress friend.  ‘And the Bastilla?’ Amigo 3 asked.  The waitress went to check and advised it would be with us as soon as possible which was code for ‘They’ve just started making it now’.  Given this was a weekday lunch, 1 hour plus for meals to arrive was stretching the friendship.

The food was delicious.  The Chickpea Battered Mussels w Almond Skordalia were indeed spectacular.  Juicy little mussels in a crisp, cumin flavoured batter piled generously on the plate with a cooling sauce.  They were divine!  Amigo 1’s Lamb & Preserved Lemon Tagine was tender, falling off the bone. Amigo 2’s Lamb Meatball Tagine w Egg & Spicy Sauce was hot and bubbling with a neat little side of couscous.  When they arrived, the Chicken Bastilla were wonderful also.  A lighter and no doubt more market friendly version of the traditional Moroccan Pigeon Bastilla, the filling was moist and dark with the appropriate dusting of icing sugar and cinnamon over the pastry.  I’ve had Bastilla in Morocco and this was just as good.  By the way – no one can afford the traditional pigeon so it’s chicken for the locals too.  It didn’t take long to eat it all. 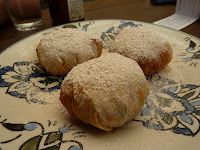 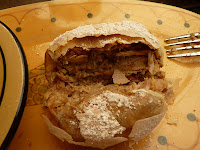 The manager was most apologetic about the delay in our meals and offered 50% off the entire bill. Hard to argue with that.  So, it’s a bit of a dilemma.  There is no doubting that the food was great but there is the niggling problem that it arrived well over an hour after we ordered it and, the fact that no one enquired of us during that entire time.  It wasn’t that busy and we were obvious enough, sitting beside two other tables that had been served.  Perhaps you will fare better but as much as I don’t want to deny myself those mussels, I don’t think I’ll be back.