on January 21, 2012 by Fiona Ryan
Filed in: Brisbane, Restaurant Review

I had intended to post a different blog today but then I saw Anthony lying on the couch in a self induced funk.  With a sore head and hooded eyes, the haze of alcohol visibly evaporating out of his pores, how could I not write about what led to him to this and have a laugh at his expense at the same time? 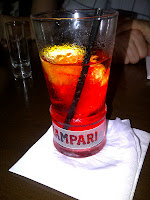 Why contain ourselves to celebrations leading up to December 25 and then return to a drudge of working weeks for the rest of the year?  1889 Enoteca obviously feel the same way.  So in the post Christmas, salad munching, detox regime period known as January, Enoteca have a plan to lure in patrons during what is traditionally a quite old time in the restaurant industry.  In a canny piece of marketing, Enoteca are offering Friday afternoon punters the opportunity to experience a traditional Italian aperitivo.  In this case, you buy the Aperol or Campari (or anything else you’d like) and they’ll supply a small plate of antipasto including marinated eggplant, capsicum and artichokes with a few slices of salami and some light and crispy bread sticks. 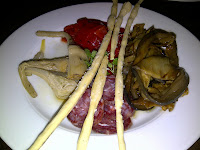 The idea of an aperitivo is to stimulate the appetite.  It remains unclear if this is an appetite for food or drink.  The sharp Campari has very grown up flavours, being sweet with a lingering bitter aftertaste.  It’s not to everyone’s taste.  Not to worry though as Enoteca can oblige from it’s extensive bar and amazing wine list, which has won a swag of ‘best’ type awards.  First drinks despatched, it was time to try something different.  We decided upon a bottle of sparkling when our sommelier suggested one that was not on the list.  A grippingly dry Prosecco from the Emilia-Romagna region in Italy, it was unfined, cloudy, yeasty and not dissimilar to a traditional brewed cider (not that lolly water they are serving in pubs all across the country and passing off as cider).  With four of us, it didn’t touch the sides.  And so, onto the reds….you can imagine how things went from there.

1889 Enoteca at Woolloongabba is not only on our side of town but is directly en route to home.  It’s housed in the old Moreton Rubber Works, circa 1889 and is a delightful mix of industrial urban chic and early 20th century suburban draper shopfront.  Be sure to make a quick trip to the toilets downstairs so you can gaze upon the amazing wine cellar which doubles as a private dining room.  Returning to the bar, make sure you also  take a tour through the wine room on one side of the restaurant.  Plenty of good drops and some dodgy looking bottles that contain an amazing array of wines, fortifieds and the like.  1957 Hardy’s Vintage Port anyone?  The bar staff know their stuff but be warned, they’re also well practiced at upselling.  This is a great place to drop in for a drink or two on your way home from a busy week.   I’m sure Anthony’s advice would be, just make sure you stick to the plan. 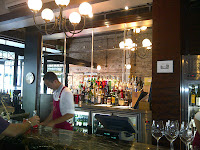