on January 28, 2012 by Fiona Ryan
Filed in: Brisbane, Restaurant Review

I’ve not had a lot of luck in the breakfast and brunch stakes in Brisbane so when my sister-in-law said she wanted to go out for Sunday breakfast, I was wary.  As she was staying in a hotel near Petrie Bight, I selected the Story Bridge Hotel being convenient for her to walk to and for us to find a park.  It was only after I had arranged breakfast that I read the reviews on Urbanspoon.  Oh dear…. It was too late to arrange somewhere else so we would just need to cross our fingers and hope for the best.

We arrived at 8.30am, were asked where we would like to sit (inside or out) and then offered menus whilst our drink orders were taken.  It’s a reasonable menu with a variety of egg and bacon variants, some sweeter options (Walnut & Fig Loaf sounds good) as well as build your own breakfast options.  The waitress returned with water and took our orders. So far, so good.  Our drinks arrived soon after and were all correct.  Also good.  Breakfast at SBH is in the Shelter Bar, at back of the pub.  The Shelter in actually underneath the arches of the bridge and was once a WWII bomb shelter.  Of course, it’s the location of the famous Cockroach Races on Australia Day.  You can get up close an personal to Pylon 19 whilst your waiting for your food to arrive or your cockroach to win. 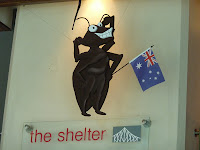 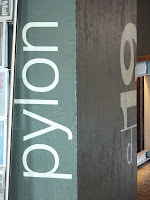 Before long, our meals arrived.  Still good. The Ham Omelette w Double Smoked Ham & Bocconcini was a little firmer than I would have liked but certainly a good bet with the accompanying toasted Olive Sourdough.  Chefs, please remember that omelettes should be slightly runny when being flipped and slid out of the pan as the eggs will continue to cook.  French Brioche w Scrambled Eggs, Spinach & Smoked Tomatoes was pleasing, particularly since the brioche was actually brioche and not just some croissant or bread pretending to be something it wasn’t.  Not sure who SBH is using as their baker of choice but they should maintain the friendship.  The smoked tomatoes were particularly tasty.   Blueberry & Ricotta Pancakes came with a side of USA in the form of bacon, banana and maple syrup and was again popular. Sure, the bacon was eaten separately but there were no complaints about the taste or portion size.  Good, good and good. 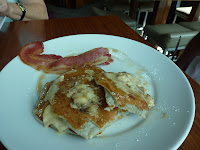 So that was breakfast at the Shelter Bar. We were in at 8.30am – out by 9.45am.  Fed, watered and only slightly lighter in our wallets, all meals being well under $20. No slow service, no missing meals, no bad dishes.  It was a relaxing Sunday breakfast where the focus was on the year ahead rather than whether our meals would show up or not.  I have no idea what those people on Urbanspoon were talking about. 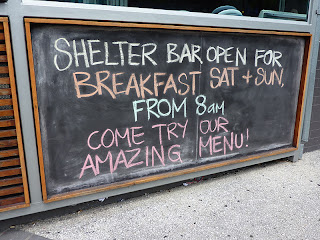