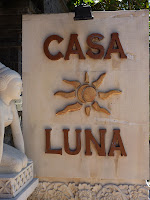 As we were spending a decent amount of time in Bali, I decided that it might be interesting to go to a cooking school.  After some research, it became apparent that Casa Luna cooking school in Ubud was the place to go.  Casa Luna is owned by expat Janet Da Neefe and her husband and is one of many businesses
they run in Ubud including a bakery, restaurants and guesthouses.  I emailed Casa Luna well in advance to book the market tour and cooking class but it was already booked out so I tried for the cooking class only on the following day and had greater success.

We were welcomed by Oleg into an airy pavillion where we would be watching demonstrations and learning to cook a Balinese meal.  Although it was a hot day, the pavillion was surrounded by lush foliage with a lovely breeze flowing through, making it a very pleasant place to cook in.  It was no surprise to find out that all participants were Australian and after introductions, it was straight into the ‘Get to know your ingredients’ session.

Oleg took us through each ingredient, freshly chopping it and passing it around for people to sniff and taste, talking about where you could buy it and most importantly, whether you could take it back into Australia.  Oleg certainly knows his Australian quarantine regulations.  I can’t say I was unfamiliar with the ingredients but there were still surprises such as the four different types of ginger and the amazingly dark and smoky
palm sugar that was as soft as butter because it was so fresh – certainly not like those rock hard packets you get at Asian supermarkets.

After a break and a refreshing Hibiscus Iced Tea, it was time to get down to business.  With the help of an assistant, Oleg demo’d how to make Rujak – a fruit salad with a dressing of that classic Asian combination of flavours: sweet, salty, sour and hot.  This included gula (palm sugar), shrimp paste, chilli, tamarind and salt ground to a paste and then loosened with water.  We tried it three different ways: with and without fish paste and then Balinese style with over 1/2 dozen little bird’s eye chillis.  That certainly cleared our sinuses.  The combination of sweet and crunchy fruit (in this dish it was pineapple, apple and cucumber) with a tart and sweet dressing with zing was refreshing and a palate pleaser.  This will be one I’ll be trying at the next summer BBQ. 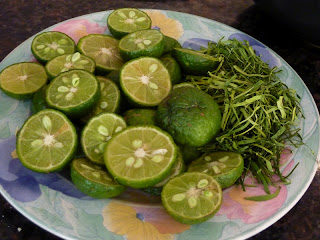 The basis for our dishes were a combination of herbs, spices, fruits and roots ground into sambals and pastes.  Rather than assigning each person a task, Oleg distributed the pre-chopped combinations and encouraged everyone to have a go.  There was a lot of grinding involved and it was all done by hand on enormous flat black lava mortars so there were plenty of opportunities to take a turn.

One of the key aspects I really enjoyed about the class was it’s relaxed pace and approach to getting people involved.  If there were participants that were happier to observe than join in, that was no problem.  Perhaps they weren’t so keen on grinding pastes but were happier threading the tempeh for the vegetarian satay.  It really didn’t matter because there were plenty of tasks to do but there was no pressure for everyone to do something.  In the end, everyone had a go of doing at least one thing and very quickly, the raw ingredients started to be pulled together into a set of dishes for lunch.  It did help that a lot of the hard yards had been done by Oleg’s assistant, who had been prepping, chopping and steaming ingredients long before we arrived.

The final meal was enormous with plenty of unique flavours and unusual ingredients for us to enjoy at the end of a class that had not been too taxing at all.  I will post some recipes from our lesson at a later date.  The menu for the day: 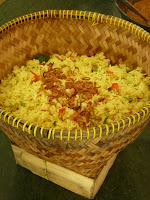 I had some trepidations about how the class would be structured and whether 15 people would be too many.  Concern turned to contentment as the relaxed presentation style and approach made for an enjoyable morning with a tasty reward and some pumped guns from all that grinding at the end of it all.  Best of all,  a place in a Casa Luna cooking class will only set you back 300 000 Rupiah ($33 to you).   I suggest you skip the markets and spend your money making your own Bali memory.   Make sure you book early as the classes are full every day. 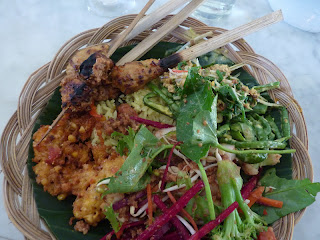