on May 1, 2012 by Fiona Ryan
Filed in: Restaurant Review, Travel

I was originally going to call this post ‘Holy Trinity’ but if you follow the series, you’ll find out why there was a name change.  I’ve spoken before about how I’m a big fan of Andrew McConnell’s work, both in the kitchen and in service at the table.  A trip for work gave me a not to be missed opportunity to visit all of his venues in one go and introduce my partner in crime to some really fantastic Bite Sized Adventures in Melbourne. 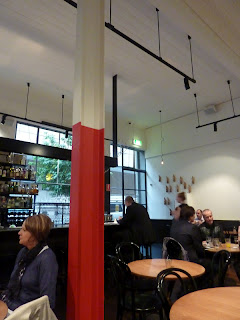 Cumulus Inc has a busy day.  From 7am (8am Sundays) until 11pm they turn meals out of their open plan kitchen, seven days a week.  The idea was to get the jump on the day with an early breakfast but the comfortable hotel bed and drizzle outside meant that early was actually 9.30am.  Not to worry.  This meant missing the breakfast crowd but being just slightly ahead of the morning tea hordes.

Homemade beans with forkfuls of ham hock stirred through the light, never cloying tomato sauce, served on a slab of toasted sourdough.  I wasn’t a big fan of the discs of pressed sausage.  Both the taste and texture instantly took me back to some Leberkase I had in a beer hall in Munich, many years ago.  Anthony obviously had no such concerns (although he too remembers the Leberkase) as he cleaned the plate. 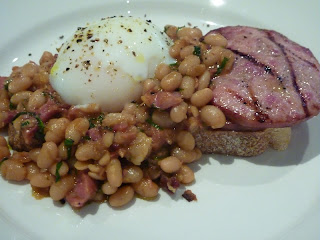 The Toasted Honey Granola look suspiciously familiar.  Hadn’t I had an unsweetened version of this, sans oats and cinnamon, sprinkled on my salad at Cutler & Co?  I believe I had.  Who says almonds, pepitas and currants aren’t multi purpose?  The generous bowl came with a small jug of milk with more available on request.  The pot of Vanilla Yoghurt had poached rhubarb, strawberry and prune in it and was very tasty when sprinkled with the Granola. 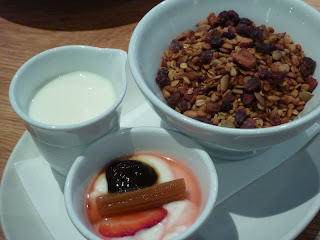 Whilst eating, we ordered more coffees and two Lemon Curd Filled Madeleines that have a 15 minute wait as they are baked fresh to order.  These arrived warm to the table, just after our regular sized coffees and were light morsels with a delicious tang in the curd. 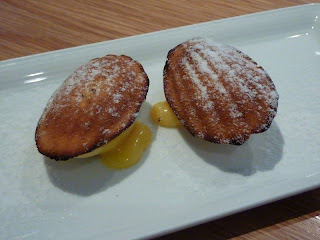 Service as always, was spot on.  We were seated and orders taken quickly, no delays in receiving our meals, plates were cleared away rapidly and there was no rush for us to vacate our table.  Why would you pay the same amount of money + half again to go to some crowded Yum Cha restaurant with a grumpy maitre’D, lukewarm food and a hand written ‘cash only’ sign, when you could breakfast here instead?

Next post: For the 5pm G&T – King Kong Casava Chips