on May 6, 2012 by Fiona Ryan
Filed in: Restaurant Review, Travel 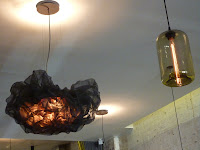 Cutler & Co has long been on the list of ‘to go’ places but poses difficulties in that it’s a degustation style restaurant so not really the best option when travelling alone.  I was now able to tick it off my list and as they serve a shorter menu Sunday lunch degustation, we could take our time, with no where in particular to be.  This is a ‘must book’ venue.  We arrived a shade before 12.30 to barely no one in the room but by 12.45, the place was jumping.  The dining room is divided into two halves with the bar to one side with a mix of sleek vying against shabby chic throughout.  I can’t imagine the time and care taken to select the lighting with a combination of black tulle swathed light shades and funky smoked glass shades with filament bulbs.  A glass fronted wine room sits beside the kitchen (not open plan in this venue) with some enormous tree ferns in a little annexe.

The menu has a combination of shared entrees and a choice of mains and desserts.  The wine list is extensive but I ordered a Chairman Wow! as a lighter alternative.  A combo of watermelon, cucumber and grapefruit, it was a zingy and refreshing aperitif before lunch.  The food arrived in small waves starting with delicious sourdough and focaccia with unsalted butter, pink Murray River Salt flakes and the coolest little butter knife I’ve ever seen.  Trout & Rye was a twist on a traditional pairing and the stand out of the set.  Cured Trout w Sevruga Caviar and Pickled Onion were set atop the lightest and crispest rye wafers imaginable.  Neither of us are fans of oysters but our modest substitute of blistered Padron Peppers with crunch sea salt were also good.

The second wave of entrees came in two sets.  Mussel Escabeche and, Hay Baked Carrots.  The mussel dish wasn’t the prettiest but the green tomatos were a perfect foil for the plump mussels with lots of tangy dressing to sop up with (my now second serve of) bread.  As much as I dislike oysters, I dislike carrots even more.  But, I couldn’t go about substituting everything on the menu so the carrots stayed and I’m glad they did.  Served with goat’s curd and grains, they were sprinkled with ash with helped to highlight the smoky taste of the carrots.  Hard to split these two.  The pattern on the plate afterwards was worthy of any modern gallery.  Everything is plated on sturdy stoneware, which is a personal fave although we both found the plate/bowls difficult to eat out of or rest our cutlery on. The sides are a little too steep.

The first set was so generous, we had forgotten there was more to come.  Roasted Pumpkin was my partner in crime’s dish of the day.  Generous chunks of pumpkin had been roasted, allowed to cool, dressed with vinaigrette and scattered with toasted almonds, currants and a few pepitas for good measure.  This same mix also makes an appearance of sorts in the Granola at Cumulus Inc.  I like that the kitchens are linked and can share core ingredients even though they a different styles of dining and flavour profiles.  It was an enormous serve and I was already flagging so the Buffalo Milk Haloumi didn’t get the attention it deserved.  I found the rosehip jelly a little cloying but a bit of mint and some vinaigrette from the pumpkin helped to cut through.

We didn’t go for the mains special on offer and I had mixed feelings about that.  On one hand, I knew it would be far too much food.  On the other hand, it looked bloody spectacular when it arrived at the table next to ours.  A huge slab of slow roasted lamb shoulder that was straight out of the Flinstones.  They do something similar at McConnell’s Golden Fields so, perhaps another time.  When our slender steaks arrived with their little pot of Brussels Sprouts I was relieved to see a more modest portion size.  It is a little known fact that Brussels Sprouts means ‘yuck’ in Flemish.  Or I could be making that up.  In this case, the sprouts came julienned with a light creamy sauce so they weren’t too bad.  I did not enjoy the winter greens though.  They were not palatable and seemed overcooked so I set them aside.

Dessert was a Creme Fraiche Tart and Roasted Figs & Icecream.  The tart had a good crack to the top of it after some blowtorch action and was nicely unctuous with the tangy rhubarb.  I was looking forward to the Roasted Figs w Fig Leaf Icecream as it sounded like the perfect Autumn Sunday lunch dessert.  It came with large crumbs of  Brown Butter Cake and whilst enjoyable, it did have the big bang flavours I was looking for.  Each element tasted fine but they did not really come together on the plate which was a bit of surprise in what had been an otherwise stellar meal.

Service as always, was exemplary.  Just before we headed out to lunch, I took a quick look at Urbanspoon and saw some really bad reviews.  People talked about ill prepared food (frozen no less), small portions and lack of innovation.  It freaked me out.  What if I got to Cutler&Co and it was dodgy or a rip off?  It would ruin my dream of a perfect run at McConnell’s restaurants.  As it turned out, these people were clearly out of their tree.  Within moments of arriving and being whisked to our tables, from the meal substitution through to the waitress being able to tell me what the white fluffy dusting on my dessert was (maltodextrin), the experience was excellent.  I hope my review does something to quash those other reviews. 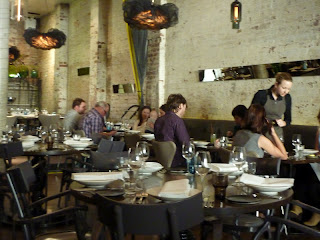