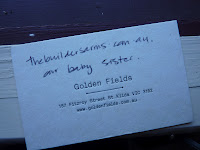 So finally to the last instalment of Grand Slam.  I knew nothing of this venue’s existence until I was at Golden Fields where I chatted with the staff about the ‘Holy Trinity’ of dining.  ‘Have you been to our newest?’ they said, and gave me a little hand written card.  No, I hadn’t but I soon would.  And so it was, a day later, than I found myself in Fitzroy, just down the street from Cutler & Co, at the Builders Arms Hotel (no apostrophe).

The Builders Arms has been around for over 150 years, through good years and lean times.  The corner pub has been taken over and restored, pared right back to basics with a wooden floor, plain surfaces and a neutral palate of greys, creams and black.  Some may call it sterile but as it’s a pub, I call it practical.  The central heritage tiled bar serves the bar as well as the pub’s casual dining room.  Towards the back of the dining room is the kitchen and, in the courtyard, a massive rotisserie with dozens of chickens slowly rotating and roasting over a wood fire.  Now that’s what I call a talking point. 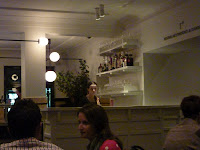 We opted for a few drinks and a selection from the bistro menu, that can be eaten at a few small tables in the bar area.  We ordered a serve of Pig ear scratchings ($6.50) to have with our Old Mout Cider and Vale Dark Ale and were massively disappointed to find that it was the one item they didn’t have that night.  I imagine that almost anyone who was after a snack would be drawn to these so I’m hoping that supply and demand will smooth out over time and these will be freely available on a regular basis.  The Olive toast, Ortiz anchovy, pepper ($4) and the Smoked curd, crudite, pomegranate ($9) substituted.  Both were great snacks to have with a drink although a few more cruidite with the whipped curd would have been welcome. 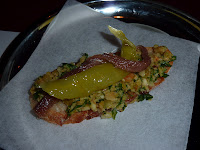 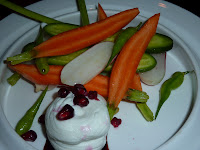 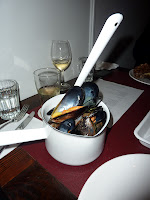 After one drink, the bar was already full and all the tables in the bistro were taken.  We moved on to a couple of glasses of wine and one of my faves, mussels.  1/2kg Sea Bounty mussels, saffron and aioli ($13) came in a cute little pail with a slotted enamel spoon for serving.  Tasting of the sea with the right amount of garlic, it was more than enough for a main meal for me.  Some bread would have been welcome to sop up the juices and I would have ordered some, but it didn’t appear on the menu.  It seemed criminal to waste those juices.  Isn’t that the best part of ordering mussels – the mop up job at the end?  Thankfully we had ordered House chips ($7) so I was able to enjoy some of the juice but to me, it’s just not the same as bread.  The very trendy ‘of the moment’ dish Ruben sandwich ($12) with posh pastrami, melted cheese and mustard was hearty and would be great for soaking up alcohol after one too many.

As is the norm nowadays, there are no bookings for dinner so it’s first in best dressed.  We were only visiting for a quick drink and a light meal so it was time to go and let the pre-public holiday revelers have our table.  All in all, this was a relaxed dining experience with plenty of interesting flavour combinations as well as a broad range of crowd pleasers on offer such as steaks, fish pie and split jack (rotisserie) chicken.  The service was efficient and even when the bar and dining room became crowded, there were no long wait times or a sense of being forgotten.  I’m looking forward to them sorting out their Pork scratching supply too.

Whilst paying the bill, I had a quick chat with one of the friendly bar staff.  During the conversation she mentioned that in June (now showing on the website as July), the Builders Arms will be opening a more upmarket dining room upstairs called ‘Moon Under Water’. Watch this space.

With a wide variety of venues, dining styles and flavour themes, all Andrew McConnell needs now is a B&B and he’ll be the Rick Stein of Melbourne.