on June 5, 2012 by Fiona Ryan
Filed in: Brisbane, Restaurant Review

Local &/or General is the title of a song by The Models.  Not when they were in their daggy ‘Barbados’ phase but earlier on, in their edgy, urban grit phase, prior to James Freud joining.  It’s a song that’s always stuck in my mind and it seemed like an appropriate title for this occasional series of reviews about very local coffee shops that I can walk to from my house. 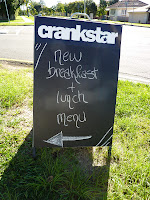 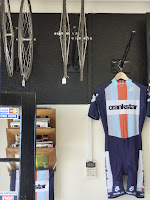 Dear little Crankstar.  Tucked away in the middle of nowhere in Camp Hill.  It’s actually in Whites Hill which is not even a suburb, but a locality.  Located in a strip of 1950’s shops that had, the last time I visited, been taken over by the burgeoning empire of Olive Jones Ironing Service.  Olive’s still there (lazy bloody professionals who don’t have time to iron their shirts) but Crankstar has managed to squeeze into a corner.

Crankstar is a clever name because, of course, it’s a ‘cycle boutique’ that does coffee too.  The styling of the cafe is simple and clean with a good looking stone feature at the front of the counter as well as the inevitable bike themed decorations.  Whilst the focus is on the serious business of cycling, there is a good range of drinks, snacks and light lunches on offer.  If you’re really keen, you can also buy a set of branded cycle shorts. 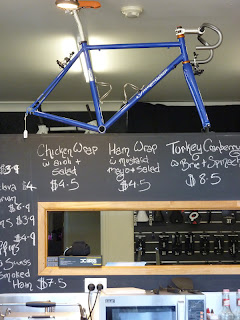 I was walking between home and the grocery shop and as it was right on morning tea when I arrived, I treated myself to a large mug of coffee.  The day I visited, I was the only person there, other than the barista.  Pity, because it was a glorious Autumn day and I kicked back with a great view over the suburb.  The coffee tasted fine but I wished there were a few more people there to provide a bit more atmosphere, though there was a good soundtrack in the background.  It’s not going to set the world on fire with dining options but Crankstar is a serviceable little cafe (geddit?) that has potential. 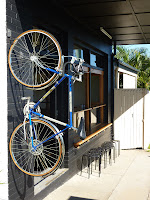 I would encourage you to support a local business by paying a visit to Crankstar, thereby ensuring it’s ongoing success and maintaining a variety of coffee shops within my walking range. I will certainly swing past for another coffee and snack, the next time I am walking to the shops.

Next post: Lace up your boots, we’re going trekking….