on June 9, 2012 by Fiona Ryan
Filed in: Brisbane, Food Experiences

A few weeks ago I found myself on a trek in the wilds of Fairfield, Brisbane.  It took me across many borders and I met lots of other like minded trekkers on the same journey.  It was my favourite kind of trek.  No physical exertion involved and lots of eating along the way.  It was of course, a Taste Trek.

Consummate organiser @melkettle had done the leg work in arranging a special Taste Trek with @tastetrekker for the Twitterati.  Sally Lynch owns and runs Taste Trekkers, ‘for food lovers and adventurers’.  She offers cooking classes, treks in Brisvegas, overseas treks as well as special events such as weekends away.  The focus is always on good food and fun.

So on a Tuesday night, 20 of us arrived at Sally’s house, which incorporates the cooking school, to learn about ‘Asian Street Food’.  We could not have been made to feel more welcome or more at home.  The commercial kitchen opens on to a huge living space and lovely pool area which is in spanking new condition as Sally’s house had been inundated in the floods of January 2011. 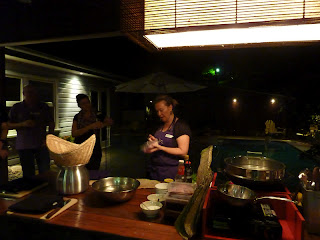 After some introductions and drink in hand (‘Asian Beer/Non Asian Wine’ the invite said), we went on a tour of the cooking stations that had been set up around the kitchen and porch area.  There were 5 stations covering Sticky Rice in Lotus Leaves, Satay, Salt & Pepper Chicken, Vietnamese Crispy Pancakes and Chicken Coconut Soup.  At each station, Sally gave us a quick demo of what needed to be done, offered a few tips and chatted about the origin of the foods we were eating.  The demos were fairly free form and whilst there was a recipe on hand, we were encouraged to adapt the recipes to suit our tastes.  The key was to maintain the classic flavour balance of sweet, sour, spicy and salty. 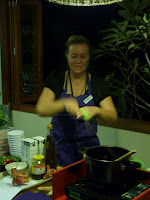 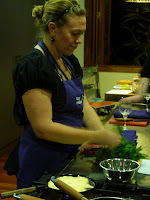 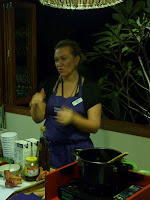 We broke off into small groups and the cooking began.  All the meat had been chopped for us, the sauces, herbs and vegetables set up and the implements on hand, so all we had to do was get to work.  There were lots of interesting new ingredients to try as well as fantastically fresh produce including tofu that had been made that day.   If you want to get your own fresh tofu, go on the trek with Sally to Inala. 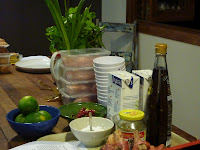 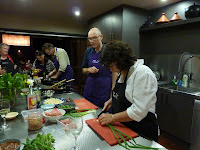 Sally and co were on hand to help if we got stuck but it was basically just a group of like minded people all pitching in to produce a great little (and not so little) snack at each station.  The conversation flowed freely and before we knew it, the gong was being rung and we were moving on to the next station. My favourite dishes of the evening were a toss up between the tiny little satays, finished off on the BBQ and the Salt & Pepper Chicken. 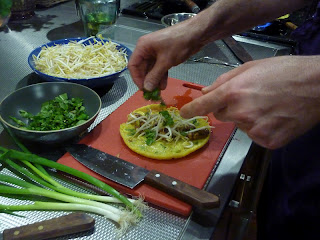 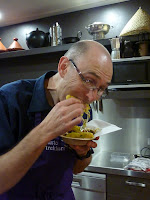 As the evening drew to a close, there were a couple of plates of interesting desserts on offer, from Sally’s trip to Inala that day.  It was a great opportunity to try some of the sesame encrusted goodies I often see on the counter at the Asian Supermarket, but never end up buying.  The final dish was clever and impressive – a twist on banana fritters.  A slice of banana placed on a egg wanton wrapper, covered with another wrapper, sealed and then popped into hot oil.  They puffed instantly and were ready to be tossed in cinnamon sugar and served with a quick caramel sauce that Sally had whipped up.  What a pity I don’t like bananas…. 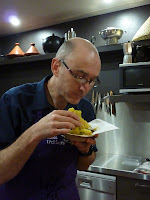 And then, it was time to go, with a container full of leftovers for the next day’s lunch and the recipes from the trek.  So relaxed and interesting.  No judgements about whether you like things spicy, how good your knife skills were or whether you had been to the far flung places that Sally had brought these recipes back from.  I would recommend a cooking class or trek as a great gift, something to do with your brother or perhaps as a fun girl’s day out.  It would also be a really good team building exercise.  I can’t emphasise enough what a fun evening this was. 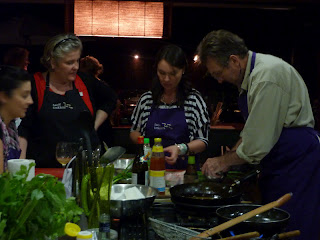 Thanks to Sally for having the Twitter crew along and also to Mel for organising the event.