Worth the Buyer’s Premium

The ‘Premium’ being that dreaded wait for a table.  We’d walked to Auctions Rooms from the CBD and on approach, we could see a crowd outside.  On this Melbourne adventure, I had a partner in crime and my solo dining theory (no waiting, tables always available for one) had to be parked on this occasion as we sat in the queue for a table.  We’d chosen Auction Rooms for late brunch/early lunch based on the local buzz and were glad we did.

Admittedly, the wait was short and happily, they had a concierge (cool guy with a clipboard) who kept things orderly and made sure people were seated promptly.   Auction Rooms has won a slew of awards for its coffee and while we waited, we watched some serious caffeine being turned out including the impressive siphon coffees. 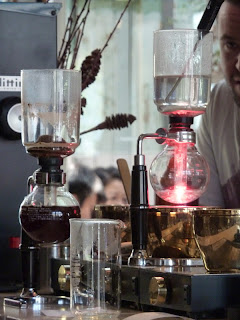 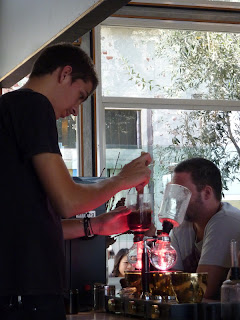 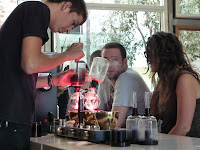 The decor and atmosphere is great.  As the name would imply, the cafe is located in old auction rooms, giving it a warehouse feel with lots of edgy urban grunge styling.  A real surprise was the sunny courtyard out the back with a conservatory style ceiling.  This place can really pack them in, which is why the wait was short. 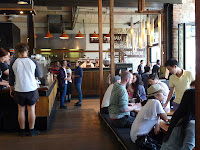 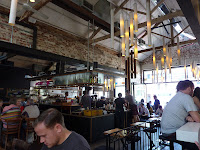 Whilst we waited, we tried one of the siphon brews and a regular espresso.  The siphon coffee was ‘different’.  Not different in a bad way, just different from what we have grown accustomed to.  It came in a beaker and looked more like tea than coffee, obviously as a result of the brewing process.  The liquid was clear and the taste, smooth and clean with a slightly bitter aftertaste.  We tried it straight and also with a small amount of milk.  It’s probably an acquired taste but I would certainly be happy to have it again.

My Roasted pork belly was a triumph!  Sliding out of breakfast/brunch and into lunch, this was perfect.  The thin crepe was folded around a succulent piece of pork belly that after hours of slow cooking, had been browned and crisped in the pan.  The eggs were as described – slow poached eggs that had had their own turn in the pan to give them a slight bronzing and crispness.  The slaw provided the crunchiness and my only regret was having to share a small part of the dish with my partner in crime.  I wanted it all to myself.  I would have like a second crepe to make up another crunchy, porky parcel but perhaps I’m being greedy.   This dish suggests that all those other brunch dishes on the menu would be as equally delicious. 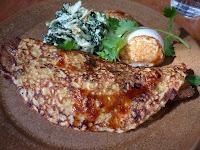 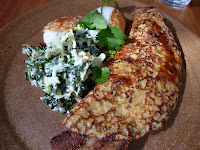 At my urging, my dining partner ordered the breakfast special, Scrambled eggs w smoked trout on sourdough.  This flavour combo is one of his faves and as tasty as it was, we both thought it a little pedestrian compared to some of the standard fare.  Chorizo & manchego sandwich next time maybe? 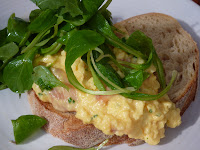 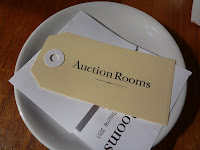 Considering both the number of tables and the turnover, service is very efficient.  We waited less than 10 minutes for our meals and perhaps only 5 for the coffees.  There seems to be a heavy bias towards Pork products and I can’t say that much of it is slimming but as we only visit Melbourne once a year,  I would suggest that Auction Rooms is on the revisit list for us. 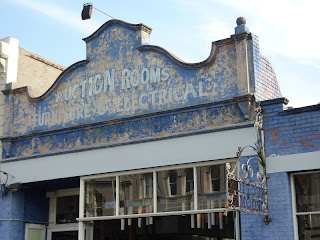