An extra post this week as there are quite a few queued at mission control at present. 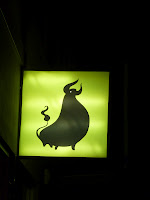 Bodega.  Wasn’t that the name of a sparkling wine in the 70’s*?  This Bodega is more akin to it’s Spanish origins, being a wine cellar or bar.  I found myself on a raining evening in Sydney at a loose end.  My walk across the Bridge was a blow out but it seemed a waste not to try to get out and do something.  Armed with my Solo Dining Theory, I headed up to Surry Hills for a night of Argentinian snout to tail eating at Bodega Tapas.  The bull on the side of the building told me I had arrived.

I would have been able to grab a seat straight away but because of the rain, those who would have sat outside had to move inside.  No matter, I was ushered into the adjoining bar area and offered a drink while I waited for a spot.  Though I’m partial to a dry Fino Sherry as an aperitif, this time I opted for a Paloma, a classic cocktail of tequila and pink grapefruit soda and a squeeze of lime served in a lowball glass.  Deliciously salty and tangy.  Two sips in, my seat was ready and I entered the noisy and as my very average photos attest, dark, world of Bodega proper.

I was certainly sitting at the hub with a place neatly laid at the bar, overlooking the chefs and right beside the pass.  My waiter offered watter and told me about the specials.  It was suggested that main may be enough for one person and probably should have been but I told my waiter that looks could be deceiving and he was underestimating how much I could eat.  I made my choices, ordered a glass of wine settled back to watch the meals being prepared and finish my Paloma.  The kitchen is certainly a busy little place.  Barely bigger than my own galley kitchen, there were four chefs turning out dishes solidly as well as one lucky assistant who got to wash dishes and turn out batches of squid, at the same time.  The pace was fast but never frantic and there was time enough for a laugh and a joke, making it a very enjoyable kitchen to spy on. 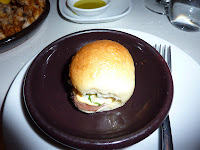 First to arrive was my Steamed milk bun w BBQ tongue & crab ($7.50).  The warm, soft roll enclosed thick slices of seared tongue (!) and sweet crab, dressed in a creamy sauce.  My only complaint is the same one leveled at Golden Fields Lobster Roll – too small and over too soon.  More of these next time and perhaps a Jamon & Mahon Cheese Croquette ($4) as part of my never ending search for the perfect croquetta.

Next to arrive was an absolutely enormous batch of Fried spiced calamari with aioli ($18).  This is definitely a ‘to share’ dish as there’s nothing stingy in the portion or the seasoning.  All that spicy saltiness! Crispiness! Tender calamari encased in crunchy savouriness in every forkful!  It was too much but I ate it anyway.   Whilst I munched my way through this substantial dish, I watched the strangely phallic Bodega chorizo w sofrito paste ($14) flying off the pass.  They looked very odd indeed, sizzling plumply on the grill throughout the evening and then being thickly sliced onto the serving plates but they are obviously popular so perhaps you should try one when you visit (looking at the portion size, this is also a ‘to share’). 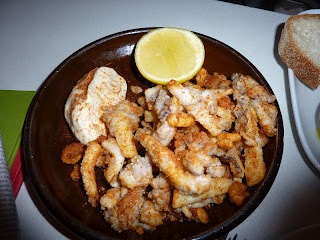 By now, the noise had cranked up to 11 and there was a small crowd hovering inside the door waiting on tables.  They would have to wait because dish number three had arrived, Smoked lamb ribs, creamed corn & coca cola chilli glaze ($26).  Originally I was going to have the Tamale but as I saw this going over the pass, I made a snap decision to try the ribs  They were smoky and tender and not too sticky.  The creamed corn accompaniment was sweet and complimented the smokiness well.  Truth be told, the waiter was right and I couldn’t fit them all in.  Well, I could have but that was just being silly wasn’t it? 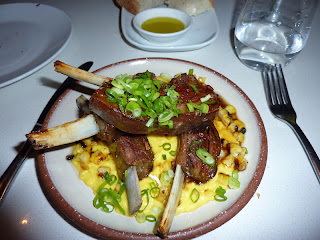 Despite the entreaties of staff to enjoy another glass of wine or a dessert, I had well and truly had my fill and decided that enough was enough.  It was a great unexpected evening out.  A chance to sample some flavours that I’ll be encountering in a short while in South America and so much better than sitting in the hotel room.  And, who says you can’t have tequila on a school night? 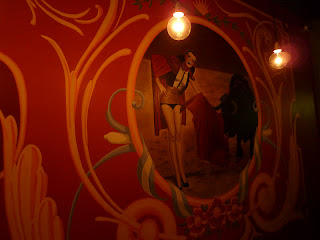 *Bodega Sparkling Wine was indeed made in the 1970’s by McWilliams.  Though they have tried hard to erase all record of it on the internet, you can still pick up a cheeky drop on e-bay if you are so inclined.