on June 26, 2012 by Fiona Ryan
Filed in: Brisbane, Restaurant Review
A throw away comment at the end of the Eurovision party saw a small group of us recovening on a Friday evening at Public.  It’s been on the list for a while, not the least because my husband and many of my friends work in the same building.  I wish I had a bar below my work that I could slip down to on a tough Thursday afternoon (or Tuesday morning for that matter). 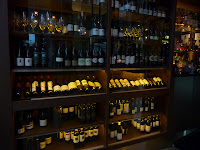 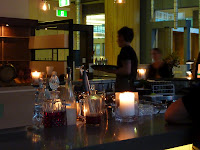 Public’s a funny place.  It’s on the second floor of an office block with plenty of glass looking out onto the street and onto the internal atrium of the building.  Entry is via an escalator from the street.  A large bar bisects the restaurant with drinks on one side and dinner on the other.  It’s a typical modern fit out with funky furniture in the bar area, including a couple of those wicker chairs like the one Solitaire sits in, in Live & Let Die.  And yet…..  From the media buzz, I thought the bar would be heaving on a Fridy night, but far from it.  There were certainly people enjoying a drink and I’m sure the pricing would keep some away from the 5 o’clock swill but it was still surprisingly sedate.  It seems that Public is just a little too far away from the action to sustain a lively Friday night on the tiles. 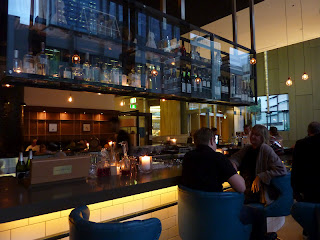 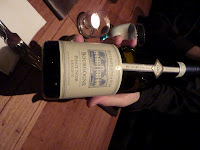 After a few drinks at the bar, we were hunted down by the waiter aand seated for dinner.  Again, the dining space is odd with plain furnishings that are probably supposed to exude an urban chic vibe but appear plonked down and little lacklustre.  Past some booths that are positioned near the kitchen, we are tucked at the back on banquette seating in the fatherest corner that really doesn’t have much of a view of anything, not even the main part of the restaurant.  It’s a good looking menu with an array of tasting plates of different sizes as well as some larger mains and sides.  Some of the tasting plates are right at the upper level of pricing so I was glad that there were enough of us to sample several of the much talked about dishes and spread the cost.  First up was the legendary KFD. 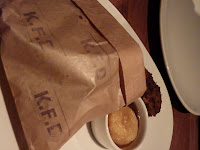 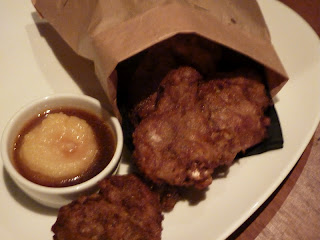 Like it’s KFC namesake, the tender duck is coated in a mix of secret herbs, spices and flour then deep fried.  It came with a little dish of something I wasn’t quite sure of but turned out to be a take on KFC’s well known mash & gravy combo.  The duck was delicious and to be recommended however, the mash and gravy were luke warm and not palatable.  Disappointing at $26 for 3 pieces. 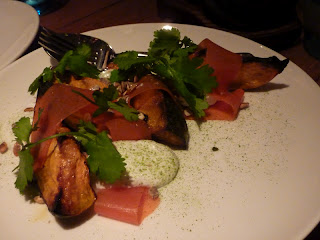 The warm salad of Pumpkin, Coriander and Chilli and the Truffle Mac ‘n Cheese were better.  The pumpkin was caramelised and sweet, with strips of what looked like salmon but were in fact wafer thin slices of carrot.  A dollop of creme fraiche and a rustic scattering of coriander finished the dish.  There may have been some chilli but I didn’t detect any.  Enjoyable.  Truffle Mac was very popular.  I’m no fan of The Mac so only had a small taste and certainly, the truffle flavour carried throughout.  Others at the table enjoyed it immensley with it’s cheesy, bubbling top and creamy filling.  Beware though, the iron pot this is served in is extremely hot and two of our party suffered small burns.  Yes, it was the boys….
The Free Range Pork Belly w Asian Slaw & Nahm Jim was suggested on the menu as a main for two.  At $70 they’d have to really love their pork and between four of us, there was plenty to go around. The pork was tender and juicy with the desired crunchy crackling top.  The table was divided on the Nahm Jim as a suitable accompaniment and whilst I enjoyed it, the fish sauce component was very salty.  The Asian Slaw with crispy shallots on top was crunchy and refreshing and I went back for seconds.  Along the way we had ordered some smoked potato skins which were indeed smoky but with a blob of sour cream straight out of the tub (you could still see the edge of the container imprinted), they were more Sizzler than fashionable bistro. 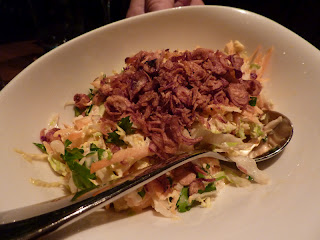 I really want to like Public.  The food is for the most part well prepared and presented.  It’s just not hugely inventive or exciting.  They have an excellent bar and wine list, which attests their link to Canvas at Wolloongabba.  And yet the atmosphere in the bar is so laid back, it’s almost non existent.  You’d go for a drink, but would you stay for another?   I’m not saying the food was bad or that the evening was a disaster.  It just wasn’t the exciting eating experience I was after and the atmosphere didn’t live up to expectations.  Maybe, on a different night, things would be different.  I haven’t written them off quite yet. 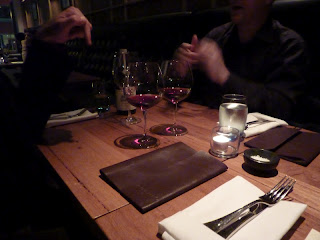 I think Public are going to find it difficult to capture and hold an audience in the location they have chosen.  They may want to consider their pricing and certainly have more of an eye for detail in plating and service.  I could be wrong, I could be right.  You decide for yourself.