on July 10, 2012 by Fiona Ryan
Filed in: Brisbane, Restaurant Review

There’s an endless list of restaurants to visit and there’s always more to add as others are ticked off.  Sometimes though, one sneaks in from the side and snags a dining slot.  Orto Trading Co was one such restaurant, suggested by Sean as a place to meet and catch up.  Our old friend Terry Durack had nothing but good things to say in his review so who knew?  Perhaps we’d be rubbing shoulders with him and Jill again. 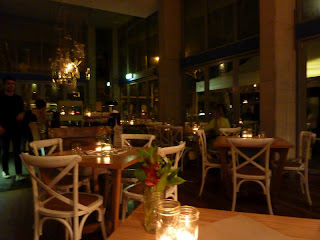 Arriving on a Tuesday evening, I was surprised to see a scattering of people braving the outside chill, sitting next to gas heaters.  We took the more sensible option of sitting inside.  I found the seating configuration inside not altogether satisfactory as the tables for two or three were crammed on the edges of the restaurant, near the pass or the door of the kitchen and at end of the bar, where there was a constant flow of traffic.  At 7.20pm the place was half full but by 8pm it was near capacity inside (as well as the hardy few outside). 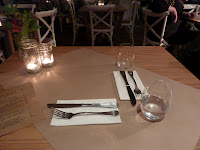 The waiter was attentive throughout the evening covering both drinks and food at several tables.  The wine list covers the length and breadth of Australia with a couple of imports thrown in and as it was a school night, there were plenty of decent wines to choose by the glass for under $14.  We had both looked at the menu online and knew this was the kiss of death to the dish we wanted to try.  Whilst the menu of the day was almost identical, the Okra Fritters weren’t on offer.  No matter, we substituted for Cauliflower Fritters and truth be told, the Bloody Mary Aioli accompaniment that caught our eye on the Okra Fritters was being served with the Cauliflower.  When the fritters arrived, I could not help but compare the look of them to the Calamari I had enjoyed only a few weeks before at Bodega.  Almost identical in look but a very different ingredient.  Small pieces of Cauliflower in a simple, light batter that were fried, sprinkled with paprika and served with the Aioli.  I’m not certain how much like a Bloody Mary it tasted but it was garlicky and quite tangy, perfect for the nutty cauliflower.  They didn’t even touch the sides.

The main had also been decided before we arrived but we nearly swerved when the special of the day went past.  A Clay Baked Pheasant looked spectacular in it’s modern Beggar’s Chicken garb but we stayed on target and ordered from the Mains for Two section of the menu, the Crispy Pork Hock tossed in spicy salt w poached pear, carrot puree & glazed brussel sprouts.  Regular readers will know that I believe Brussels Sprout is Flemish for ‘yuck’ but I was prepared to risk it for the greater good of the pork on offer. 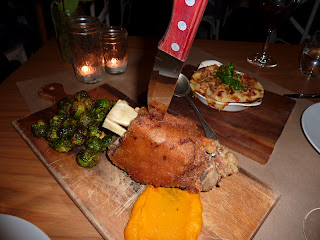 Now in the last last few years, I’ve had more than my fair share of pork.  You don’t spend two months in Spain and not enjoy the porcine delights on offer there.  The same with France.  My most memorable pork meal though was in Prague where we had the biggest ham hock I have ever seen.  Until now.  When the pork arrived, it came with an over sized knife and fork that only added to the theatre of it all.  It was most satisfying to hear a nice crunch as the knife carved off a hunk for each of us.  Superbly cooked, tender and yielding to the fork, every mouthful was a delight and of course, the poached pear was the perfect accompaniment.  I could even find merit in the carrot puree (another arch enemy since kindergarten) but the jury is still firmly out on the Brussels Sprouts.  To add insult, they are obviously in season and were abundant to overflowing on the serving board.  A side order of Jerusalem artichoke and parsnip gratin was creamy and nutty but probably too much for the two of us.  You certainly can’t complain about the portion size at Orto so perhaps think twice about a side if you are ordering a main for two. 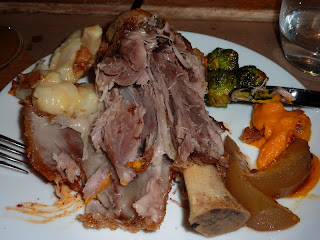 No dessert to follow but rather, a chance to try the cheese board.  I found the cheese to be incredibly good value at (a hazy recollection of around) $13 per piece. Very reasonable and making it a lot more likely that you may even buy 2 or 3 pieces rather than just one at the usual $18 or $19 a piece.  We went for a piece of Cropwell Bishop Stilton which came with a very generous serving of fruit bread, fabulous fresh honey and comb as well as a small whole poached pear.  You can’t argue about the value of that!

For me, Orto Trading Co was a great experience.  Service was good, the menu appealing (I’ve been told that the Scotch Duck Egg is an extremely popular entree), serving sizes generous (of wine too) and pricing reasonable.  No Terry and Jill in plain sight, though I’d be very happy to return to try and snag those Okra Fritters.