on July 20, 2012 by Fiona Ryan
Filed in: Brisbane, Restaurant Review

Local &/or General is the title of a song by The Models.  Not when they were in their hipster ‘Outta Mind, Outta Sight’ phase but earlier on, in their edgy, urban grit phase, prior to James Freud joining.  It’s a song that’s always stuck in my mind and it seemed like an appropriate title for this occasional series of reviews about very local coffee shops that I can walk to from my house. 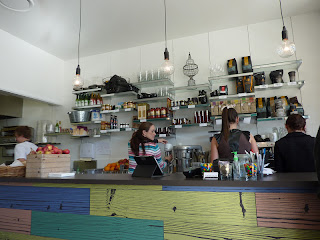 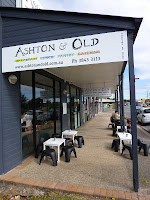 I read about Ashton & Old via a subscription.  The review was positive but basically said, ‘avoid, avoid, avoid’ between the hours of 10am and 2pm weekdays if you don’t want to share you dining experience with gaggles of gossiping Mums and noisy kids.  Taking this warning on board, I’ve visited on two successive weekends, hopeful that most parents were shuttling their kids to sport or ballet.

We arrived at the relatively early time of 8.30am to avoid the crowds.  The greeting as soon as you walked in the door is friendly with plenty of staff on hand to seat you, take your order and serve.  On both visits we were offered a choice of places to sit and water without asking.  The room is basically the four walls, some windows that open out on to street and a mix of table and bench seating inside as well as some small stools and tables outside.  The decor is modern, minimalist.  I like the look and feel of the place but like most new fit outs, it’s all hard surfaces so the noise bounces around and the volume in the rooms escalates significantly as the place fills. 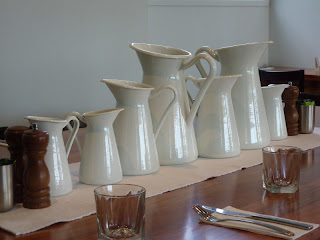 There’s a good looking menu with plenty of savoury and sweet options and I’m pleased to see that if you decide to have a lighter option such as muesli trifle or fruit salad w yoghurt, they don’t charge like a wounded bull at $7 a serve.  The most expensive breakfast main is $16 and there’s plenty on offer for carnivores and vegetarians. Good to see some different breakfast options too such as the unusual pan fried black pudding, cheddar, avocado & corn salsa on tortilla ($16) that taps into the current mania for Mexican style flavours.  There was no question this dish was going to be my choice.  Others on the table ordered the braised mushrooms, poached eggs & marinated fetta on sourdough ($12) and, house made baked beans, ham hock, baked eggs & toast ($14).

Meals arrived promptly and my black pudding tortilla was just the ticket for a jaded breakfast palate.  Full of fresh flavours and a substantial size, I was happy to see the corn salsa had been made from scratch with corn straight from the cob.  That’s the eye for detail and extra effort that I warm to.  The black pudding serve was generous and my oh my, it was peppery.  Perhaps, a little too peppery.  There was plenty of cooling avocado and creme fraiche to take the kick out but the black pudding maker had a very liberal hand with the pepper.  I suspect the pudding is made off site so I’m suggesting Ahston might like to try the Eumundi Smokehouse Black Pudding.  It’s got a hint of sweetness with nutmeg and cinnamon and a bit of an easier hand with the pepper.  Having said that, it wasn’t so spicy that I wouldn’t order it again.

House made baked beans were served in a cocotte, straight from the oven and deemed substantial and enjoyable.  The mushrooms and eggs came with two well poached eggs but the fetta was not discernible.  Either it had melted into the pan fried mushrooms of they had forgot to scatter it on. The meal was deemed enjoyable but lacking some oomph so maybe some more fetta or another ingredient such as some caramelised onions could make it more exciting.  The mushroom eaters said they enjoyed their meal but would order something different next time.  Coffee and drinks ordered throughout the meal turned up promptly and although the place became busier, we were never forgotten. 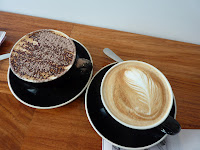 By the time we left, the brunch crowds had arrived so we were happy to head off on our mini food safari.  I certainly recommend Ashton and Old for breakfast and brunch, and their lunch menu had some very promising items on it too.  I’m glad we can walk to this place as the destination makes it worth the exercise. 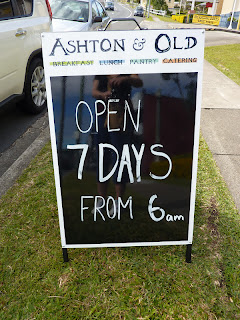 Next post: There’s a Bookshop in My Kitchen – Random Recipes #18