on August 7, 2012 by Fiona Ryan
Filed in: Brisbane, Restaurant Review
Food Trucks are just so ‘now’.  They’ve been a phenomena in the US for a few years and have heralded the introduction of ‘Dude Food’ as a food trend.  Dude Food is relatively cheap, easy to hold meals that are typically eaten by ‘dudes’.  Think ribs, buffalo wings, popcorn, tacos, hot dogs, sliders (which are really just mini hamburgers) and hoagies (which are long rolls or subs).  The emphasis is on holding the food in one hand as the other is probably holding a beer.  Food trucks and restaurants have tweaked menus to differentiate themselves from your typical takeaway.  Pulled pork is popular as a filling, spicy popcorn prawns are an upmarket version of popcorn chicken and pork belly tacos are beyond your usual Tex Mex fare.  There are various food trucks in Sydney and Melbourne but at present, Brisbane has only one, though plans are afoot for more (hurry up!) 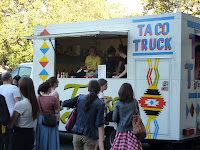 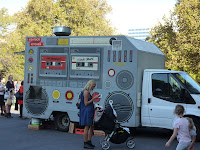 Part of the fun of food trucks is finding them.  By virtue of the fact they are trucks, they are a moveable feast.  The trucks might have a few favourite haunts but can turn up anywhere at any time.  Some post schedules on their websites, others use social networking to let people know where they are serving.  And so it was on a Sunday evening at 6pm that I saw a tweet from the Bun Mobile, letting me know that they were on a footpath in Greenslopes. 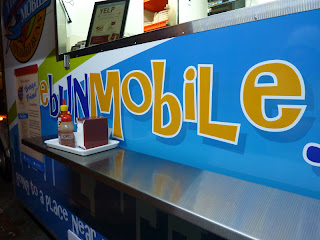 Plans to cook dinner were shelved as we headed a couple of suburbs over to get ourselves some bun love.  The van was parked on the side of the road and was doing a fairly brisk trade.  The menu is simple – pulled pork, terriyaki chicken or wagyu beef on a steamed bread bun, all for under $10 each. There was crisp pork belly special as well as a banana caramel option. 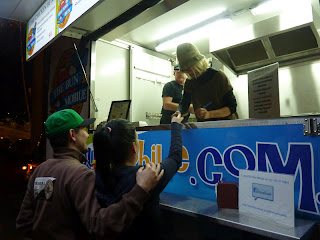 Being bun novices, we ordered three between the two of us.  The chicken, wagyu and pork special.  As we waited, word had spread and more people started to arrive.  Before we knew, there was quite the little crowd waiting on the footpath.  With Christine on orders and Harry at the grill, they had a good routine going and it wasn’t too long before our buns were ready. 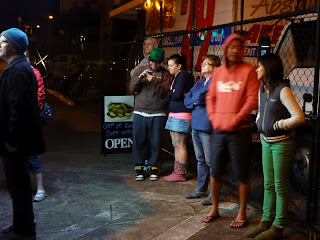 Tempted as I was to stand on the footpath and try one there and then, they were a little too messy for that so it was into the car for the quick drive home.  I’d seen these tasty bread treats before in another form, at my most recent visit to Golden Fields, where the pillowy steamed bread was served with double cooked duck and black vinegar.  The Bun Mobile Buns are served with appropriate Asian style sauces, dressing such as hoisin or red dragon and salads such as mint, cucumber and shallots.  The meat on all three buns was a generous serve and cooked perfectly.  I was particularly impressed by the wagyu as I must confess I’m a bit of a doubting Thomas and don’t think it’s generally worth the palaver. 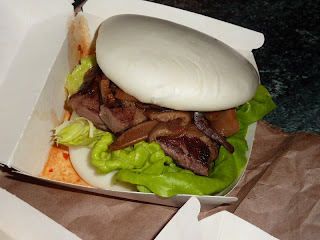 Three buns was more than enough between the two of us for dinner and I expect that one is more than sufficient if you grab a bun at lunch.  They’re a little messy, with sauce and juices but, that’s what serviettes are for. 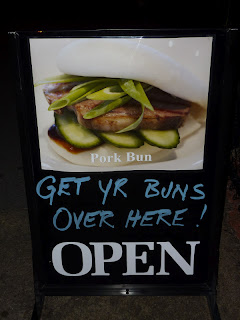 Lunch and dinner services are short – usually only two and half hours and you need to get in quick.  Not long after we got home and were tucking into our buns, a tweet popped up telling us they had sold out.  I had a great time chasing The Bun Mobile and hunting down my dinner.  The food is fresh as can be, well priced and tasty.  A Dagwood Dog from a van at The Ekka is not the Dude Food experience they are replicating.  It’s about fast, fresh and reasonably priced but also a chance to show case some unique flavours and ideas.  I commend you to go on your own Bite Sized Adventure to track down an unusual meal. 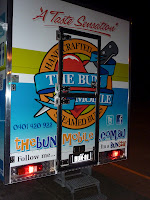 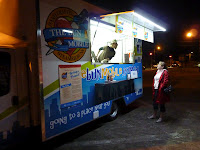