All Our Ducks Lined Up

on August 29, 2012 by Fiona Ryan
Filed in: Brisbane, Product Review

Baguette Bistro + Bar is an old favourite.  It’s saying something in these days of two for one deals and entertainment vouchers that we would travel across the river of our own free will and pay full price to visit this Brisbane icon.  Baguette has been wowing the punters for over 30 years with French Bistrot style cooking with a modern touch for Australian palettes.  It’s where my husband took our daughter for her special ‘grown up’ meal with Dad for her 21st birthday.  For a number of years, Bruno Loubet was the head chef and we spent many an evening working out way through his special January set menus.  Bruno’s now heading up his own place again in London (Bistrot Bruno Loubet at The Zetter – we’ve been, it’s fab) but Baguette continues from strength to strength. 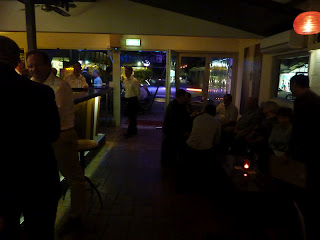 On this particular night, we joined 90 of our nearest and dearest to enjoy a $95 Duck Degustation of 5 dishes and paired wines.  When we arrived, we were greeted by the patron himself, Francis Domenech, hugging, kissing and pumping the hands of guests as they arrived.  As we made our way into the bar, it was crammed with happy revellers enjoying the delights on sparkling wine poured with a very free hand.  The meal started at 7pm and though I expected we may be seated with a larger group, each party was seated at their own table.  Once the majority were seated, there were some welcoming comments from Francis whilst the first course was delivered. 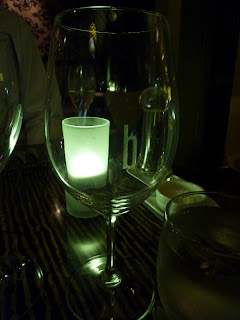 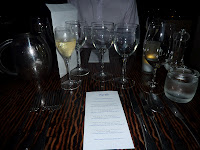 Rillettes of duck w sour dough, fig jam, cornichons & pickled walnuts was a wonderful start with the classic pairing of duck and fig.  The shredded dark meat rilletes were mild in flavour, generously piled onto the sour dough crouton with the contrasting figs, walnuts and cornichons.  This course and the next were paired with a young Austrian Sepp Moser Gruner Veltliner.  With none of the mineral characteristics of aged Gruner Veltliner this drop was light and fruit driven, easy drinking with the meaty rilletes and the lighter consomme of the next course.

The woodland mushrooms & duck consomme w pumpkin ravioli was served warm but not scalding hot.  There were Asian undertones, confirmed by one of the chefs when he spoke about the dish at the end of the meal.  The small, sweet pumpkin ravioli gave the consomme substance but left us wanting more.  The garnish was a significant number of chopped shallot (spring onion) tops scattered over the soup and I felt they were too overpowering in their uncooked state for the delicate broth and ravioli.  Milder chives would have been a better option.

Some more words from our patron and an introduction to the next two wines saw the arrival of an enormous serve of Saute duck livers w Pedro Ximenez, confit garlic, shallots & brioche.  This was paired with a Castillo Labastida Madurado from Rioja in Spain.  For some, this may have been a confronting dish.  Though MasterChef has done much to re-introduce offal to the Australian tables, there are many who would have found this large serving a challenge.  Whilst I do not down sit to a plate of duck livers every day, I knew all the ingredients in this dish would complement so I set aside any qualms and tucked in.  The livers were perfectly cooked and tender without a hint of ‘old boots’ about them.  The PX sauce was buttery and again, the sweetness of the confit garlic was a delicious contrast.  I very much enjoyed the home made brioche but would have preferred it on the side so I could spoon my own duck and sauce on, a piece at a time, to ensure the brioche remained crisp and light.  A minor quibble.

The 42 Degrees South Pinot Noir from Tasmania was the matched wine with our main, Duck breast, soft polenta, Agen prunes, grilled onions & duck skin croutons.  This meal was divine.  I do love polenta and this particular one was nice and coarse with a discernible sweet corn flavour.  Perfect for mopping up the sauce and little bits of onion.  The duck was perfectly cooked and whilst pink, was not too bloody as some are want to cook it.  I couldn’t find any duck skin croutons but Anthony had two so he generously gave one to me. A fragrant, crunchy melt in your mouth morsel, I thought I should march into the kitchen and demand my portion but that would have been just too greedy given the amount of duck we had already eaten.

To finish, Clafoutis of duck egg w cherries & brown bread ice cream.  Clafoutis is a traditional French batter pudding that is popular all over France but in my opinion, has two things against it.  The first is that in the authentic version, the cherries still contain the stones.  Happily, this version was stone free.  The second is that the batter tends to be very heavy.  Chef Graham Waddell solves this problem by making a sabayon to lighten things up and what a fabulous dessert he’s come up with. The brown bread ice cream is also a treat with caramelised, toasted crunchy pieces of brown bread throughout, rather than just a uniform pale beige coloured ice cream.  The dish was paired with an All Saints Moscato from Rutherglen in Victoria.  Francis spoke about the fact that Moscato was misunderstood in Australia.  This is something that Huon Hooke taught us at a wine tasting years ago and it makes sense in our climate.  Rather than a heavy sticky dessert wine, a soft frizzante wine that is low in alcohol is a great match with desserts.

As is always the case at Baguette, service was seamless with plates being delivered and removed with no fuss, wine and water topped up and care taken with everyone to ensure the meal was a relaxed and pleasurable affair.  Our favourite sommelier Scott Durietz, was in attendance, making sure the wine service went well an having a quick chat with me about some of the more exotic items behind the bar.  Baguette once again lived up to expectations as the evening wound to a close and people drifted off in taxis and wandered down the street wrapped in a ducky quilt of contentment.

Next post: Empanadas on the Steps of the Spanish Inquisition