I have been visiting parts of the Andes and highlands of Peru and Bolivia.  For many, the views are literally breathtaking.  With Arequipa at 2380m, the Patapampa Pass at Colca Canyon 4800m, Cusco 3400m, La Paz 4000m and one of the the highest cities in the world, Potosi 4070m, many people suffer the effects of altitude sickness.  This can range from being a little light headed to shortness of breath and headaches right through to fever, nausea and cerebral and pulmonary edema.  Thankfully, the altitudes we have been staying at produce the lesser symptoms but they can still be uncomfortable.

A lack of appetite is a another symptom but I have been lucky enough to only have suffered a few restless nights as I work overtime to produce extra red blood cells to carry the oxygen around my body.  There are a variety of simple steps that can be taken to deal with milder altitude sickness including rest, drinking LOTS of water (I’ve been drinking over 2.5 litres per day) and trying local herbal remedies.

Locals swear by coca leaves to relieve the effects of altitude on their bodies.  They carry small pouches and bags of leaves and create a acullico (quid) of a few leaves that are chewed and held between the cheek and teeth, slowly chewing on a leaf until it dissolves.  By this point in my post, you are probably thinking that I have been chewing too many coca leaves myself, recommending the raw ingredient in cocaine to treat altitude sickness.  Just to put the record straight, whilst these are indeed the same coca leaves, the psychoactive alkaloid is negligible between .25% and .77% and would need significant chemical processing to produce cocaine.  So a bit of hot water on a tea bag is quite safe.

Coca is also used extensively in tea preparations in commercially available tea bags and in dried leaves steeped in hot water.  The dried leaves look not dissimilar to bay leaves but taste like a slightly bitter green tea. The Mate de Coca tea bags are a staple on all breakfast buffets and at altitude, hotels have coca leaves and tea available in the foyer for you to partake of any time you need feel you need it (as an added bonus, this means ready hot water for a sneaky cup of instant coffee in your room).

The other big seller is Coca Candy, Gum and Toffee.  I’m highly dubious of the actual active ingredients in these lollies and suspect there is a lot more sugar than coca in these.  They are sold on street stalls and on the mountain passes as well as a popular souvenir item in shops.  Still, I had to buy some.  They are supposed to taste fairly terrible so when you receive your souvenir, you have been warned! 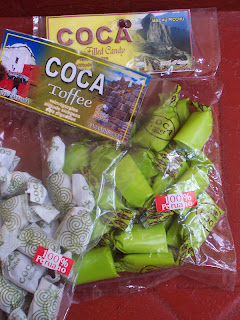