I Need a Snack With Flavour

on October 5, 2012 by Fiona Ryan
Filed in: Restaurant Review, Travel

Any Australian Gen X-er will know that phrase.  ‘I need a snack a flavour’ was the catch cry of the child in a TV commercial who’s mother offered him a piece of fruit and no doubt also told him that there was ‘water in tap’.  In previous posts I have talked about the Peruvian passion for snacking but sometimes popcorn or empanadas is just not going to satisfy that ‘snack with flavour’ craving.  It’s at those times that you need to be a bit more adventurous and enjoy one of the local specialties.

Yes, that’s right, I’m talking about Cuy or as we know it, ‘Guinea Pig’.  Cuy is very common on Peruvian menus and when you think about it, it makes sense.  They take up a lot less room than real pigs or cattle, breed rapidly and can be kept in urban areas.  Cuy are a great source of protein and are low in fat and cholesterol.  The most common way Cuy is served is deep fried (as you would a chicken or fish) or served in a casserole.
Cue gratuitous fried guinea pig shot………

OK, now that you’re over that, let’s continue.  Yes, we did try the fried Cuy but there’s not much to say about it other than it’s a lot of hard work for not much reward (think eating quail) and when nearly fried to a cinder, it tastes a lot like tough chicken.

But not all Cuy is equal.  When we visited Astrid y Gaston in Lima, we were treated to the creme de la creme of Cuy.  Astrid y Gaston is in the Top 50 Restaurants in the world and was recommended to us by Twitter friend @foodbling.  Astrid y Gaston will have it’s own substantial post when there is time and a decent internet connection but in the mean time, here’s a taster.

One of the many courses we tried was Slow Cooked Crispy Cuy w Peking Sauce on Purple Corn Pancake.  I quizzed the waiter on where the Cuy came from (farmed) and their size (large rabbit) before he told us to fold the pancake and eat it ‘like a taco’.  Of course, this is a clever twist on Mandarin or Peking Duck Pancakes and was delicious.  Closer to slow cooked pork belly than duck, it was a delicious mouthful that I would go back for any time. 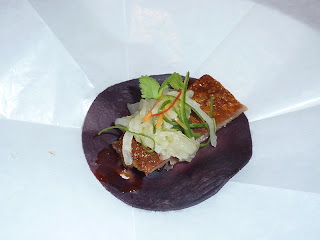 I only wished I could have gotten a photo of the sign of the side of the road of a dancing Cuy with chef’s hat, offering himself up on the menu board.  Make sure you visit my Astrid y Gaston post to read about the whole crazy menu.