on October 24, 2012 by Fiona Ryan
Filed in: Food Experiences, Travel

Sometimes, being on holidays can be hard work.  The 3am starts to beat the Bolivian Miner’s Blockade, the 10 hour driving day in Peru only to find you have another tomorrow, bad plumbing, bad food, bad company….the list is endless.  So, sometimes it’s good to have a short holiday from the holiday.  When we were in northern Argentina, I had the opportunity to spend an afternoon at an estancia (ranch).  It was billed as an afternoon of horse riding followed by an asado and ‘free flowing wine’.  If I had to ride those damn horses to get to that free flowing wine, I’d do it.

We visited ‘Sayta Estancia’ in Chicoana near the city of Salta.  Run by Enrique Carbia, he was once a high powered wheeler dealer with Big Oil but when his wife died, he re-thought his priorities and decided to move onto his estancia full time so he could be with his family and enjoy a more relaxing lifestyle.  We had been warned about Enrique’s hospitality and his desire to fill his guests to overflowing with food and wine.  The first indication that we were in for a big day was the morning tea that awaited us as we arrived at the estancia.  Cakes, buns, breads, jams, coffee and of course, all the dulce de leche you could slather on – just a little something to fortify us for the horse riding. 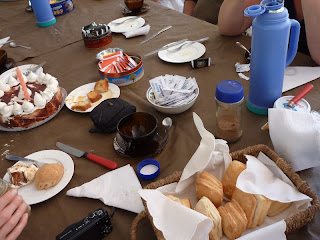 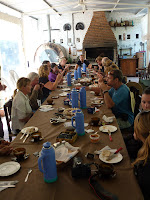 All saddled up, our horses knew the route, when to stop and when to misbehave so we really just sat on their backs whilst the gauchos chastised us for letting the ponies do what they wanted.  As we ride through the pampas, I can hear Gerald Durrell whispering in my ear with tales of rhea hunts and capturing bichos.  In their wildest childhood imaginations of galloping over the pampas and felling rhea with boleadaras, I bet those gauchos never thought they would be forced to endure the company of 20 greenhorns meandering through the Argentinian landscape for a few hours. 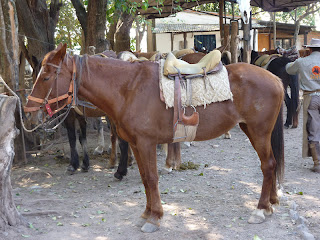 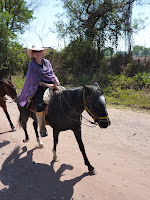 Eventually we headed back to the estancia to wash up and enjoy the promised free flowing wine.  Whilst everyone relaxed in the shade, I took a look at the BBQ to see what was cooking. 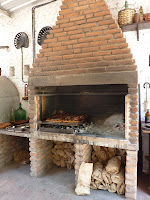 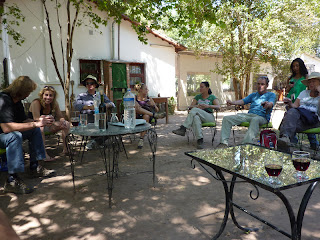 As you would expect, there were huge hunks of beef joined by beef ribs and fat little home made sausages bubbling on the grill.  As a nod to the one vegetarian who bravely joined this meat fest, some delicious salads were also on offer including whole pumpkins that had also been baked on the grill. 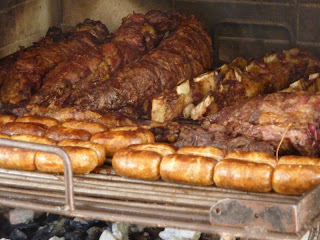 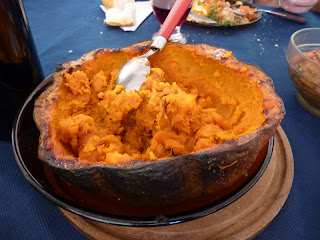 Enrique re-filled our glasses with an organic, soft red wine from a local producer, called us to the table and starting piling our plates with goodies from the grill. 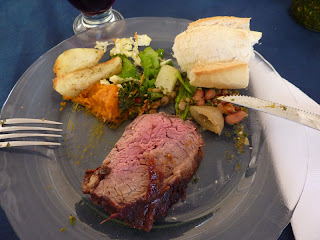 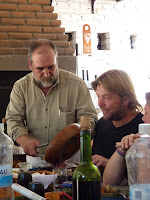 My old friend, Chimichurri, turned up on the table.  Despite the fact that every article and post you read tells you that Chimichurri is the ubiquitous sauce that is seen throughout the whole of Argentina, this was the only time I saw it in my travels.  A home made version, it was stored in jars, just as I had done when I made my own version. 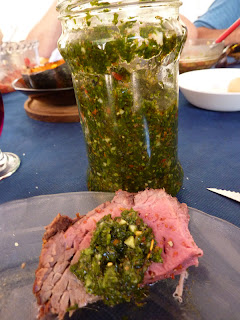 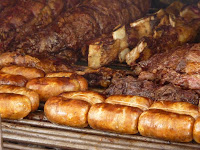 The wine kept flowing and Enrique kept feeding us.  We had been told before we arrived that we could try saying ‘no’ to his hospitality but that we may offend.  I thought it was just easier to pace myself and keep saying ‘yes’. 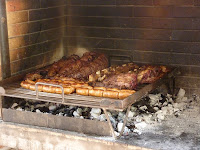 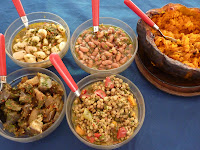 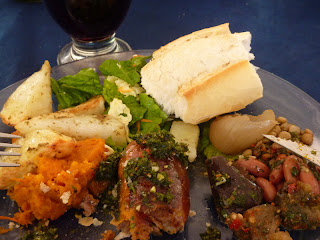 We thought we were safe when when Enrique started to slow the pace and enjoy the wine.  This was the cue for Laura, his daughter, to step in and start serving hefty wedges of hazelnut and chocolate cake piped with Italian meringue.  Goodness, those Argentinians know a thing or two about desserts! 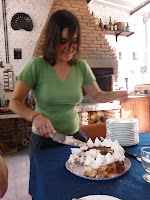 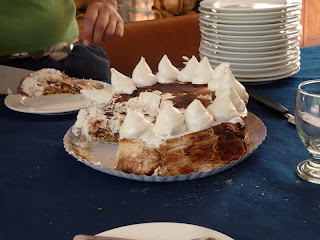 An Argentinean asado is about much more than the food.  It’s about the planning, the preparation and most importantly the sharing.  It’s about forming friendships and memories that will last a life time and I certainly made my fair share.