The Milkman of Human Kindness Delivers

on October 31, 2012 by Fiona Ryan
Filed in: Brisbane, Restaurant Review

I try not to post two restaurant reviews in a row as variety is the spice of life but I have such a big backlog that I’m bending the rules. 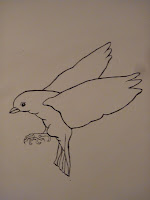 Last week we were off to see troubadour, people’s poet and general rabble rouser Billy Bragg at the very grown up location of the Concert Hall at QPAC.  (What happened to the days of sticky carpet and under age drinking at East Leagues Club eh?).  I have often bemoaned going to events at The Cultural Centre.  Though things have improved with the opening of a few more cafes in the complex, it’s still a bit of a foot slog to find somewhere decent to eat.  I’ve been working my way along Grey and Little Stanley Streets and this time, it was Piaf’s turn for a quick pre-show meal.

There is plenty of variety on the small menu comprising a few entrees, some mids, mains and accompaniments.  With the ‘Bard from Barking’ on stage in just over an hour, there was only time for a glass of wine and a main each.  Two chose the Braised duck leg w puy lentils, peas & orange emulsion and I selected the Grilled pork cutlet w roast pumpkin, lyonnaise sauce & dried plum.  We ordered some Almond butter glazed seasonal vegetables and the carb junkie just told us ‘I always have to have bread’ so some Sourdough w balsamic & herb butter was also ordered.

Wines were delivered with a fresh bottle of water, very quickly followed by four modest slices of sourdough with balsamic mixed into butter as an accompaniment.  I’ve seen some grumbles on various sites about the size of the mains but I had no complaints.  My pork cutlet was very generous and nicely caramelised although it was starting to edge into overdone territory.  The pork was still tender but not as juicy as it could have been.  Pork is a delicate meat and although it’s perfectly fine to serve it slightly pink, many diners still have old fashioned ideas about pink pork being dangerous so I guess most chefs just opt to cook for the masses.   I only had a small taste of the traditional pairing of the duck leg and lentils and whilst the leg wasn’t huge, it was tender and ducky and more than enough for a posh school night dinner.   The seasonal vegetables were very popular with asparagus, broccolini, peas and beans in a buttery glaze.
There was just enough time to squeeze in a second glass of wine and a dessert of Rose petal blanc manger w caramelised white chocolate mousse & pistachio puree.  The intense caramelised white chocolate was delicious, the rest enjoyable but unremarkable.
It’s rare now days to find a main under $30 and whilst it’s always nice for it to come with complimentary vegetables, I’m afraid those days have long passed.  The wine list had a dozen French wines for around $11 a glass and a premium wine list was also available.  Service was attentive and pleasant and whilst I thought we may have been pressed for time, we were able to enjoy the meal at a relatively leisurely pace before heading off to QPAC.  Piaf is a good option for pre-show dining – no regrets.

It goes without saying that Billy Bragg continues to amuse, challenge and entertain. 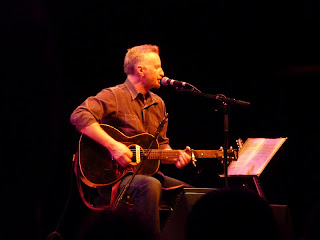 Next post: Always a Chance to Make a Peso