Always a Chance to Make a Peso

on November 3, 2012 by Fiona Ryan
Filed in: Food Experiences, Travel

The day before we went on our fabulous Rancho Relaxo adventure, we went on decidedly less fabulous tour of the Valle Calchaquies in Northern Argentina.  The reason it was less fabulous was because we had been led to believe we were going on a wine tour, with a day of tasting of Argentinean wines.  In fact, we were going on day tour where we stopped at only one winery.  The general consensus of the group was ‘ripped off’! 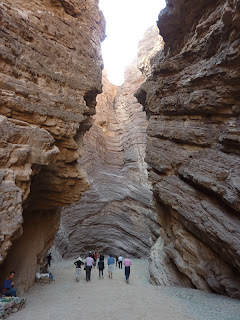 Still, we made the most of it, seeing a variety of sights including a rock formation called The Cathedral.  This was a natural amphitheatre where we were treated to a sing along by our guide who just happened to know the musicians waiting inside.  What a coincidence!  As he serenaded the non plussed group, I wandered back to the entry of the canyon where I had seen two women setting up some type of stall.  This turned out to be Cafe Te De Arcayuyo. 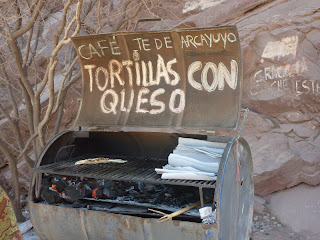 The cafe was simply a table where tortillas were being prepared and a barbecue made from a 40 gallon drum, where they were cooked.  I was the first customer of the day and watched as the last dough balls were being formed and the first tortillas were rolled flat with a simple piece of dowel.  There was definite greyish tinge to the dough but it was hard to tell whether this was from the flour or from a build up of smoke and charcoal on the implements. 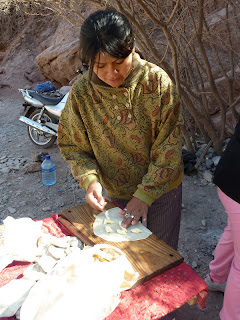 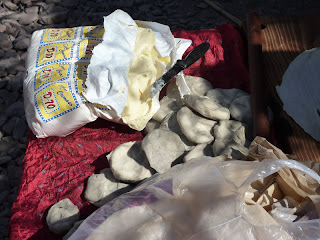 A large bag of queso cremoso (a type of thick cream cheese) sat on the table and small pieces were flicked onto the tortilla which was then folded in half and placed on the grill.  It took only a few minutes to cook before it was nicely browned and the cheese inside had melted.  The cheese tasted like a cross between melted Camembert and cheddar and as the tortilla cooled, it started to crisp which meant it was time to shovel into our mouths.  For 8 Pesos ($.160), this was a delicious, smoky mid morning snack to keep us going until the next beauty spot.  I was more than willing to support these enterprising locals who were managing to keep the tourists much happier that our crooning guide. 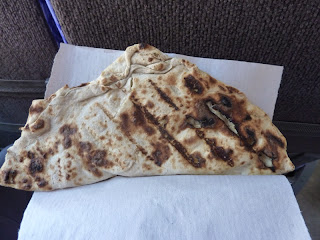 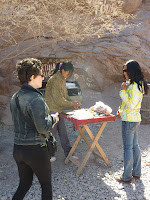