on November 18, 2012 by Fiona Ryan
Filed in: Brisbane, Restaurant Review

Local &/or General is the title of a song by The Models.  Not when they were in their chart topping ‘Outta Mind, Outta Sight’ phase but earlier on, in their edgy, urban grit phase, prior to James Freud joining.  It’s a song that’s always stuck in my mind and it seemed like an appropriate title for this occasional series of reviews about very local coffee shops that I can walk to from my house.  It’s been a while since I last wrote about my local haunts. 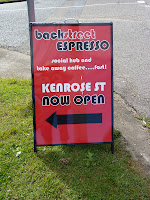 backstreet ESPRESSO is located at ‘the other end’ of the suburb and is in fact, on the edge of Carina.  As the name implies, it’s down a side street in a set of old local shops that have been forgotten about since the advent of the Gigantor Mall at Carindale.  The advantage of these older shopping centres is that the shops are bigger (and rents probably cheaper), the footpaths are wider and there’s plenty of parking.  The disadvantage is that they are often tucked away so it can be hard to build up a customer base.  backstreet is very busy on weekday mornings as people pull up or walk past for their early morning espresso on the way to the bus or train.  It has built up a loyal clientele, as evidenced by the many coffee cards in the mini filing box on the counter.

Luckily for backstreet ESPRESSO, they’ve got two things going for them – good coffee and a great owner operator in Michael Smith (and they finally have a website).  We’ve visited a couple of times and could not have been made more welcome.   The decor is simple and functional with plenty of space both inside and out.  Orders are taken at the counter and if you are eating in, delivered to your tables.  When we’ve visited there has been a stream of locals who pull up to grab a quick takeaway and at least one or two tables with diners.  The atmosphere is relaxed and the staff are friendly which makes it very easy to sit and watch the suburb wander by. 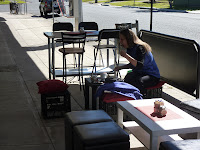 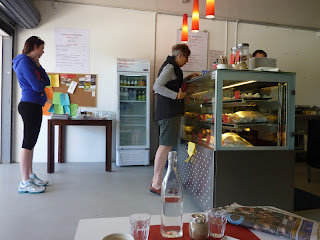 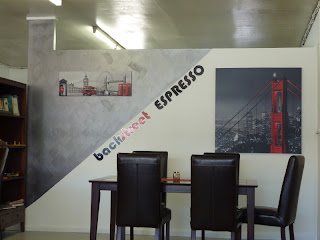 As well as some very smooth and rich Elixir coffee, there’s a simple range of in house or locally made cakes, wraps and sandwiches on offer.  I usually just have coffee when we go out but on one visit, we decided to split a Bacon and Egg Turkish.  Big Mistake!  Now, we have to have one every time we visit.  Along with bacon, egg and spinach is the most delicious home made tomato relish I think I have ever had.  Not too sweet, with discernible pieces of onion, spices and even sultanas, this sauce elevates the simple roll to a delicious treat.

Along with good coffee, food and service comes a genuinely friendly and likable owner in Michael.  With a background in chefing and owning restaurants, he was looking for a change in pace and Backstreet offers this.  When there’s been a lull in customers, Michael has chatted to me about food, his family, my family, the neighbourhood, the customers and shown me around his kitchen and talked about plans to turn it into a fully operational commercial kitchen.  He has a refreshing attitude to providing simple good quality food in a no nonsense approach.

As you can tell from my gushing post, this local cafe is well worth seeking out.  No pretensions, no one trying to get you to leave your table, good food and coffee and you won’t get a friendlier welcome. 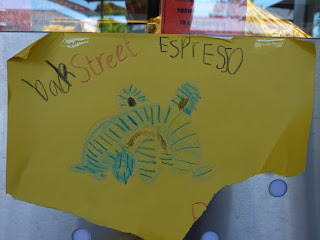