on December 15, 2012 by Fiona Ryan
Filed in: Restaurant Review

Earlier in the year, a cute little avatar popped up on Twitter – a smiling gyoza dumpling

This heralded the impending opening of Harajuku Gyoza in Fortitude Valley.  Finally, after months of  ‘it’s on the list’, it was our turn to visit this dumpling bar on our way to a night out with former hand model and lounge crooner Bob Downe.  ‘Arigato Gazaimasu!’, ‘Moshi! Moshi!’ the staff yell enthusiastically as you enter the door and are seated.  There are tables, booths and seats at the bar.  We are early enough to get a table.  Stools at the bar might be fine for the youngsters but I like a back on my chair! 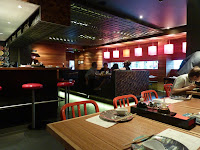 Menus are printed on paper placemats with a short selection of gyoza, some side dishes and Izakaya dishes.  An Izakaya is a place in Japan where you can go for drinks, where they also serve accompanying food.    You and I would call that ‘a bar’.  As well as the standard menu items, there are some specials that have been stamped on the placemat including an additional salad, side and an extra special ‘Christmas Themed’ sweet gyoza with brandy butter and custard.  No, we did not.

Ordering was quick and while we waited, we had a look at the sleek Japo-Scandi style decor.  Each table has it’s own dipping sauce mixing station with soy, vinegar and chilli (which is very, very hot so go carefully). The walls are decorated with cute melamine plates of various themes and these are also used for our meals.  The overwhelming vibe of Harijuku Gyoza is ‘FUN!’.  The mix of clients are some young families with kids, a couple on a first or second date and a group of die hards who’ve kicked on from the office party. 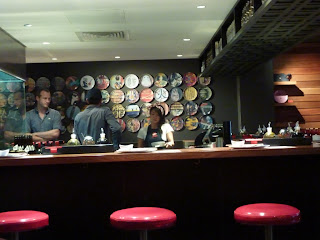 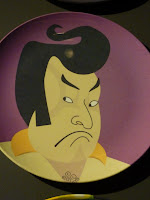 We ordered a mix of gyoza and a couple of specials as well a Saporra Black Label beer ($9) and a glass of Whitehaven Marlborough Riesling ($8).  There’s been quite a lot of criticism about the pricing of drinks at Harajuku.  Yes, the prices are a little on the steep side but are comparable with most ‘get in, get out’ type of diners such as Guzman y Gomez.  I think the problems lies in the fact that people would not entertain spending $10 on a drink in a Japanese cafe though, those same people would think nothing of spending that amount in a Spanish cafe.   This is not helped by the fact that the Harajuku online menu and the menu on the door show prices for everything except the drinks so it appears a little secretive and sneaky.*  The prices are clear on the menu inside though.

Our Grilled Duck Gyoza ($8) and the special White Sesame Salad ($6) were the first to arrive.   The five gyoza are plump and flavourful with a nicely crisped edge to them.  They taste like duck but not overwhelmingly so.  If I hadn’t known they were duck, they may have remained a (tasty) mystery.  The salad is simply shredded carrot and white cabbage with a thick white sesame dressing drizzled over the top,  finished with a garnish of crisp lotus roots.  The salad was fresh but could have done with more dressing.  When stirred through, there was insufficient to fully flavour the salad.  The addition of some home made dipping sauce loosened the mix up.  It was nice and crunchy alongside the soft gyoza that are made fresh everyday 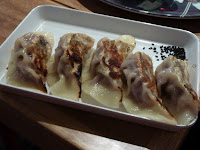 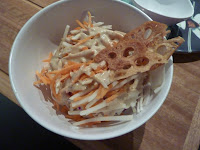 The other special of Agedashi Nasu (Tempura Eggplant) $6 and traditional Poached Pork Gyoza ($8) arrived together.   Regular readers will know that I love my eggplant.  This dish comprised two quarters of a small eggplant that had been scored, partially steamed and then finished in a light tempura batter.  A very nice contrast of textures with the light dashi stock, it was very tricky to eat with chopsticks.  There were no cutting implements to break off pieces of the eggplant and picking it up as a whole piece ran the risk of the eggplant flopping down your chin, squirting you with hot juice.  Barring the logistics issues, it was still enjoyable.  The five poached pork gyoza were served in a bowl with the typical gyoza flavours we have come to know.  They were juicy and savoury but nothing really set them apart from other gyoza we had tried elsewhere.

As we finished, I could see a large group forming in the doorway.  Contrary to other reviews I’ve read, there was certainly no one pushing from our table and out the door but we decided to go as time was short for us to head down to the Powerhouse.  Shame really as Anthony was keen on trying the Apple Gyoza for dessert.   Paying is simply a matter of walking up to the register at the entrance.  Be warned, enjoying a variety of small gyoza and side plates is the same as sharing tapas.  Those plates really add up and before you know it, you can spend $50 or $60 on a fairly small meal.

As we left, I saw a large queue forming outside.  It was still early (6.30pm) but with the Christmas season upon us, no doubt there was a healthy mix of revellers making a pit stop between bars, as well as people dropping in on their way home from work.  I don’t queue for restaurants at the best of times and I certainly would queue for a few gyoza but, if you can swing a table without waiting, it’s worth a visit. 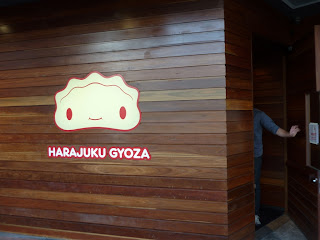 *Addendum 19th Dec 2012 – Harajuku advised some interesting information about the advertising of drink prices – ‘…the reason why alcohol prices are not on the web and exterior menu is because in Queensland it is against the law to have any alcoholic drink prices visible from outside a venue. This law is to stop the promotion of low drink prices that promote binge drinking though unfortunately also prevents responsible operators like ourselves from letting customers know the price of our drinks….’   I was unaware of this law and it would seem that many competitors are too as I have certainly seen drink prices on websites.  Thanks Harajuku for clearing that up.