on February 16, 2013 by Fiona Ryan
Filed in: Brisbane, Restaurant Review

Local &/or General is the title of a song by The Models.  Not when they were in their chart topping phase but earlier on, in their edgy, urban grit phase, prior to James Freud joining.  It’s a song that’s always stuck in my mind and it seemed like an appropriate title for this occasional series of reviews about very local coffee shops that I can walk to from my house.  It’s been a while since I last wrote about my local haunts. 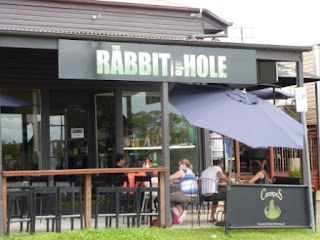 For years we have been driving around the roundabout in Seven Hills, saying it would be the perfect spot for a coffee shop.  A sleepy part of the suburb, not too much traffic and pleasant outlook.  Over time, a couple of restaurants have been able to establish themselves with an evening trade but nothing much happens during the day.  Until now.  After watching the refurb and sprucing up of an old shop front for months, and a false start on the Australia Day long weekend as ex cyclone Oswald gave Brisbane a thrashing, the Rabbit Hole Cafe is finally open for business.

We swung past last weekend but seeing it packed to the gills decided we didn’t want sit at a table in the sun or brave the long wait for one in the shade.  This weekend, a scattering of showers thinned the crowd slightly so we were able to grab a table between the breakfast and lunch rush.  There is an extensive menu on offer with over a dozen dishes and after some discussion we decided to split a ‘Rabbit Hole Mini Breakfast’ ($14).  You order and pay inside and it’s delivered to the table.  Walking inside was an assault on the senses.  The few tables inside were packed, there were people waiting for take away coffees, people queuing to order and wait staff delivering food and drink to all and sundry.  The decor is pleasingly retro as I checked out some of the dishes others were eating and they looked good from where I was standing.  It took a while to order and during that time, one thing was apparent, there’s still some ironing out of systems and processes to be done.  As I was ordering, the highly stressed barista interrupted to tell my order taker to stop doing food orders and help him with the  coffee backlog.  At the same time, a waiter walked in between the conversation to grab coffees and was told she was on the wrong side of the counter.  Meanwhile, I was half way through ordering. 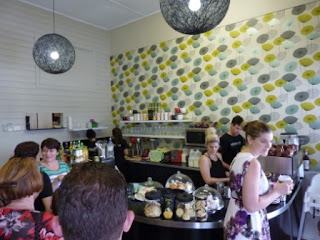 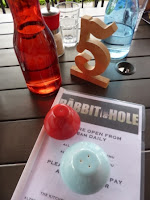 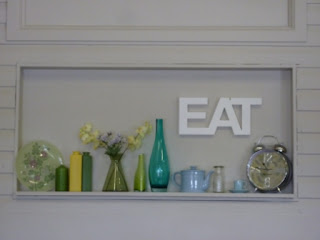 I returned to the relative calm of outside with a newspaper under my arm and saw the waiter had dropped off some water and glasses.  The Mini Breakfast turned out to be a good choice because the Mini Breakfast was quite Major.  Two poached eggs on sourdough, a small portion of mushrooms, a sausage, piece of bacon, half a tomato and portion of home made tomato relish were served on fresh spinach leaves.  The accompanying potato rosti was a standout.  Light, crisp and melt in the mouth, it was probably the best rosti I’ve ever had.  It didn’t take long for the two of us to polish it off but it would be more than enough for one.  I can only imagine how big the Rabbit Hole Big Breakfast would be ($20). There was hardly any wait for our meal and in fact, our coffees arrived slightly after.  The coffee is Campos and having surveyed the number of coffee orders inside and the number of people dropping in to grab a takeaway, it’s obvious that there’s not many places close by to grab a decent coffee.  They were doing a roaring trade. 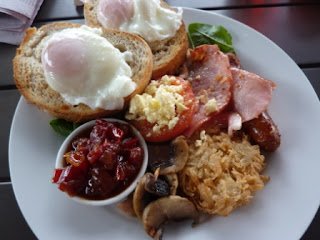 The Rabbit Hole Cafe shows great promise in both its menu and the friendly service the wait staff provided.  I’m hoping that in the next few months, it will settle into its new routine and some of the crowds will level out so that we can swing past the roundabout and hop on in on a regular basis. 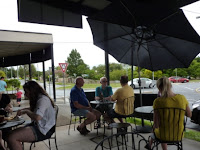