on March 6, 2013 by Fiona Ryan
Filed in: Brisbane, Food Experiences

My friend Maria told me about some cooking demonstrations she went to regularly.  She talked about how interesting they were and how amusing the presenter was.  Early in the new year, she sent an email with a list of up coming demonstrations so I chose a topic I thought we’d both be interested in and booked in.

As it turned out, I was attending a vegetarian cooking demonstration by Ranchor, run upstairs at Govinda’s Restaurant in the city.   The theme was ‘Persian Cuisine’.  We arrived at the duly appointed time (5.30pm), paid our fee and saw Ranchor busy prepping for the class.  He came over to say a quick hi to Maria and told us to grab a seat at the front as he was expecting a big crowd.  So who goes to a cooking class at a Hare Krisna restaurant on a Saturday evening?  45 people apparently.  The place was packed to the gills with families, baby boomers, alternate lifestylers and a general cross section of the population.  Maria said she has been to classes when there were only half a dozen people and others where Hens had come along prior to their night on the town.

The premise is simple.  Ranchor is at the front, demonstrating how to cook the dishes, whilst providing a commentary.  There’s an angled mirror above so people towards the back can get a view of what’s happening at the hot plate and bench.  Simple premise, highly entertaining host.  From the moment the demonstration started, Ranchor connected with the group.  Informative asides on ancient and modern day ‘Persia’, reminiscences from his own childhood in South Africa, tips on how to cook particular ingredients and what to look out for or avoid.  Ranchor practices Jainism which includes no use of garlic or onion in cooking as it is believed to ‘heat the blood’.  Therefore, spices such as asafoetida play a vital role in providing flavoursome punch to dishes.

It was an action packed two hours.  Fortunately (or unfortunately for them), there were two young girls sitting in the front row, giving Ranchor the perfect opportunity to pose questions, ask their advice, have a joke and even rope them in to tidying up. 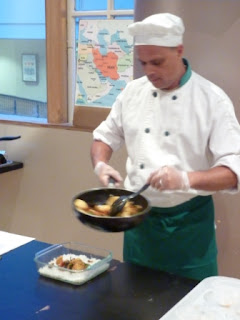 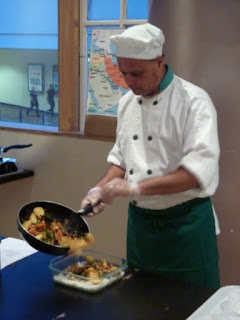 On this evening, three dishes were being prepared: Gheimeh (Persian Split Pea Stew), Biryani (Rice & Vegetable), Ferni (Rice Pudding).  Ranchor took us through each dish step by step, explaining techniques, why certain flavour combinations were used in particular ways in Persian cooking, possible substitutes and of course, a joke or two.  At the end of the demonstration, we were welcomed to the back of the restaurant where the dishes with some extra salads and bread were being served from the main kitchen.  It’s serve yourself so get in early or, you’ll be like Maria and I with slim pickings.  (Thanks in particular to the two women in front of us who knew we were the last two people in the queue but still piled their plates so high that they threw food away before they left.) 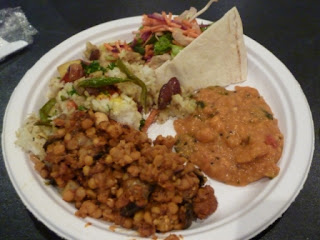 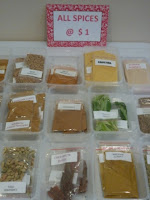 Whilst people ate, Ranchor came out to talk with people about his recipes, answer more questions on the dishes and generally catch up with regulars.  There were also spices on offer for a modest price including  Persian essential Dried Lime Powder and Ranchor’s own spice mixes that he had prepared.  The demonstration was finished by around 7.15pm and we were out by about 7.40pm.  It was an interesting and fun evening and the classes are wildly popular.  All classes are vegetarian, regardless of the theme.  The following week Ranchor was running a ‘Classic Vegetarian’ class at which over 60 people were to attend and it’s so popular that it run at least once a month.  If you’re keen, I’d suggest booking early.