Alfajores – ‘two round sweet biscuits joined together with mousse, Dulce de leche or jam, coated in black or white chocolate or simply covered with powdered sugar.’  Al-fa-horrr-ays. Heard of them? Nah, neither had I.  I like to think that I’m well travelled and across a wide variety of exotic and traditional foodstuffs but somehow, alfajores had escaped my attention.  How is that possible??

Apparently alfajores are widespread throughout South America, with a variation in Spain and even the Philippines but it’s in Argentina where they are elevated to a whole new level.  Argentina is the world’s largest consumer of alfajores and that’s obvious from the moment you cross the border.  They were served as a snack on an internal flight and go into any convenience store and there’s a vast array to choose from in both the biscuit section and at the counter in individual portions.  Our walking tour of Buenos Aires included a short dissertation from our tour guide on the best Dulce de leche and alfajores available.  Her preferred brand was Jorgito – ‘el Nombre del Alfajor’.  A brand that I had encountered and enjoyed.  But the biggest pusher of alfajores in Argentina and wider Latin America is the chain Havanna*. 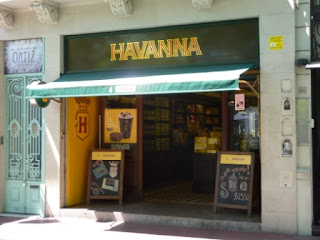 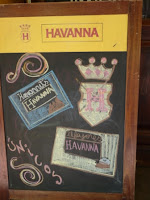 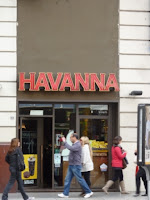 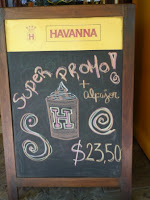 Replicating the best franchise models, you can spot a Havanna on every other block.  They have posh flagship stores with cafes, small stands in shopping centres, outlets in tourist attractions such as Iguazu Falls, run of the mill stores and of course, an opportunity for last minute purchases at airports throughout the continent.  With some time to kill in Santiago Airport, I may have bought a couple of boxes to bring home…..

The stores basically sell three of four different versions of alfajores in varying sizes and packaging combos, jars of Dulce de leche and a couple of other biscuits that I suspect rarely need re-filling on the shelves.  You can also indulge in a coffee or frappucino at many.  So what do alfajores taste like?  The biscuit is a faintly citrus shortbread with Dulce de leche caramel sandwiched in between.  Dipped in chocolate or an unusual thin, crisp shell of meringue, they taste divine but unbelievably rich.  One Havanna alfajore is definitely enough in a sitting. 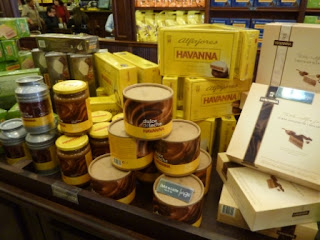 I made some rustic alfajores for the Gatronauts Dinner Party I hosted a few weeks back.  The shortbread was the best I’ve ever made and I even used some PVC piping to make sure they were all the same size and thickness to ensure even baking.  The Dulce de leche was a big pain in the neck to make as I’m too impatient and unskilled in the art of caramel so it was a bit pale.  As it was over 28c on the night I made them, I knew there was no way I was going to be able to successfully dip them in chocolate and allow them to set so I just went for the top.   Can you tell the difference between mine and Havanna’s?  It’s barely discernible isn’t it? 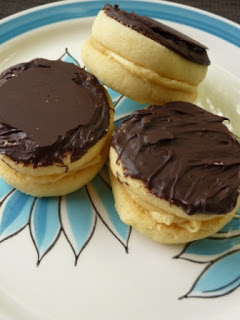 Next time your heading to South America, do let me know so I can put in an order. Thanks.

*Havanna – their spelling, not mine.