on April 30, 2013 by Fiona Ryan
Filed in: Brisbane, Restaurant Review

Last weekend I found myself going solo for a few days whilst Anthony lived it large in Sydney.  After sliding down the hallway in my socks and over sized busin 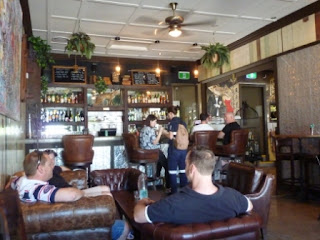 ess shirt and putting marbles under the welcome mat to booby trap the house for potential burglars, it was time to head out into the wilderness and forage for food.  I decided to revisit the Foxy Bean Cafe at the Gabba after a short lived visit in March when I thought I was well enough to be out in public but in hindsight, was clearly not.

My first visit was on a Friday morning and it gave me an inkling that Saturdays may be very busy.  On my second visit, the joint was jumping but I had arrived just between waves of diners and was able to jag a bay window seat, overlooking the restaurant.  My coffee order taken, I was given a bottle of water and the menu to contemplate.  There’s all the usual suspects on the breakfast menu as well as some more unusual offerings including the Manchego Melt (visit 1) and the remarkably satisfying Bushman’s Benny (visit 2).  Once my order was taken, all that was left to do was grab the paper, tweet a few observations and enjoy the morning.

Not that long ago, Foxy Bean was a small coffee shop.  But they decided to go large, knocking through the next two shops, adding a covered courtyard out the back and installing a bar with a pressed metal front, open late on weekends (when it becomes the Foxy Drop).  From the road, it looks like a plain coffee shop but when you walk in, it’s a bit like the Tardis, seating far more people than you’d expect.  Foxy Bean is decorated in what I can only describe as a ‘Shabby Colonial Private Gentlemen’s Luxe Club’ aesthetic.  Plenty of reclaimed wood, vintage leather lounge chairs and funky lighting with classic soul tunes and ironic hits of the 90’s piped through. 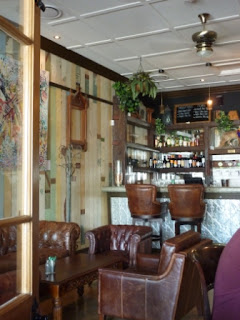 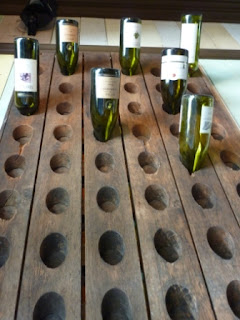 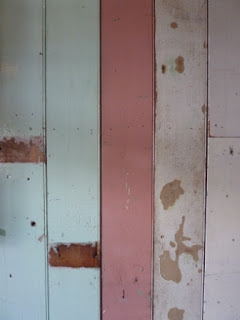 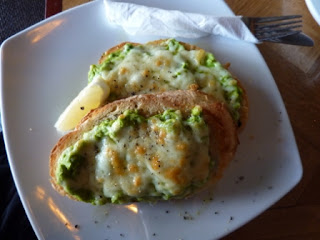 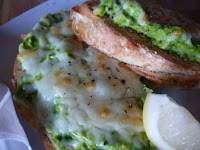 As you’d expect, there wasn’t much of a wait for food on the Friday morning but I also thought the waiting time for breakfast on the Saturday was also reasonable.  I didn’t actually order Manchego Melt ($13.90) as it contained bacon and I decided on that day that I didn’t want any (see, I told you I was sick).  So instead, I had the Avo Toast w infused lemon oil & cracked pepper ($7.90) with a side of Haloumi ($4).  Now it would be safe to say that by the time I’d installed myself and started drinking my coffee on my first visit, I already thought I needed a little nap.  So by the time the two HUGE slabs of toast with avocado and haloumi arrived at the table, I was overwhelmed.  I managed to wade through only 3/4 of the first slice and think that probably, even at 100%, I would not have gotten through both pieces.  I hate to waste good food but I just couldn’t finish it.   I know my friend Sam loves a bit of avo toast for brekkie so she’d be very happy here. 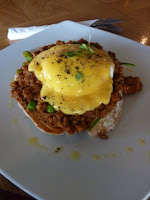 On to visit two, I was fighting fit and raring to go.  It was my intention to have a big breakfast and then skip lunch as I was going out to the Soul Food Pop Up for dinner.  I dismissed the Fruit & Nut Toast ($6.50) and the Bacon & Egg Toastie ($8.90), deciding upon the classic Eggs Benny ($14.90 w a choice of maple bacon/ham/smoked salmon).  Just moments before ordering I saw an Eggs Benny wander past my table and immediately changed my order.  With two eggs, a door step of toast and a mound of bacon, it was far too big and I didn’t want to be wasting it.  So, I took a punt and ordered the Bushman’s Benny (Awesome!) – $16.90. 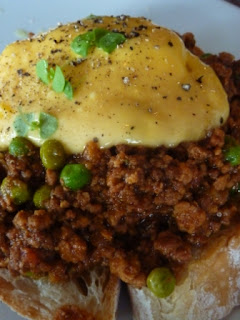 What a delight (or as they say – awesome!).  A large slab of sourdough toast with good old fashioned savoury mince, a poached egg atop and crowned with hollandaise sauce.  The egg was cooked perfectly for me – there was the slightest (and I mean slightest) hint of soft yolk but that was all.  No yolk running all over my savoury mince and sauce and spoiling the lot!  I devoured it, even the peas which I’m sure are standard in savoury mince made by Nanna’s of the world but not something I’m particularly fond of.

After finishing the paper at my own pace and enjoying a second cup of Genovese  coffee, it was time to pay the bill and go play in the traffic for a while before following the trail of breadcrumbs to where I arrived home, alone.  Both visits to the Foxy Bean Cafe were relaxed and the meals impressive in size and quality.  There is no doubting this little fox will be re-visiting.

Next post: Bound for South Australia – Hardly Starved for Choice