The first thing you need to know about Hartsyard is that it does not specialise in Harts/hearts or offal, though they may be on the menu at some time.  I’m telling you this up front as when I told a few people I was going, for some reason that thought I’d be sampling some choice cuts.  Maybe their reaction was based on my extreme Guinea Pig eating experience.  The second thing you need to know about Hartsyard is that it’s wildly popular.  Getting a booking is difficult, though not impossible.  None the less, we were still only able to get in at 9.30pm.  Therefore, the third thing you need to know about Hartsyard is that there are lots of good bars nearby (I’m looking at you in particular Water Horse) that will a) create a big appetite and b) make for some fairly average photos the next day.  After a bit of a sing and dance to Wham, my partner in crime (Pepsi) and I (Shirley) decided it was time to make for the restaurant.   So with that background… 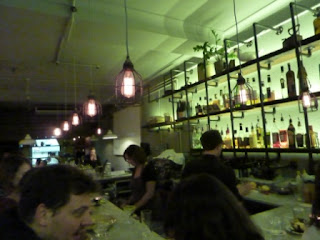 What’s not to love about Hartsyard?  It’s on Enmore Rd, at the ‘wrong’ end of Newtown, which theses days is actually the ‘right’ end.  Sick of frozen yoghurt outlets filling every second shop front at the top end of King St – what is going on with this Sydney? – the cool kids and chefs are heading for the other end of Newtown.  In what is basically a very small space, husband and wife team Gregory and Naomi have turned Hartysard into a thriving, if somewhat jam packed restaurant and bar.  Every bit of space is filled with winers and diners, seeders and feeders including the bar, communal and separate dining tables.  Service is top notch.  From the moment you arrive, are seated, drink orders taken, menu explained, meals delivered, water topped up, more drinks delivered, it never misses a beat.

There’s a lot going on food and theme wise but if I had to characterise the style, it would be ‘US Coast to Coast with a little bit of Canada thrown in’.  It’s a fun menu divided into ‘Seed’, small plates to share and ‘Feed’, larger plates for the very hungry.  Between two people, the suggestion is one Seed and two Feeds.  This was more than enough as the serves are generous so it was nice to be eating in a restaurant that respects its diners and doesn’t oversell.

The first order of business was a cocktail as we’d decided that moving on to wine at such a late juncture would have disastrous side effects the next day.  The drinks on the bar looked good and an enquiry resulted in a brace of Enmore Stingers delivered to the table with our Seed dish, Crispy Pig Tails w Buttermilk dressing, pickles & hot sauce ($18).  I’ve tried a couple of times to order these at Cumulus Inc but they’ve been off the menu when I’ve visited so I was looking forward to Hartsyard’s take on the humble curly tail.  Two large, crumbed croquets vaguely reminiscent of hockey pucks were presented with a drizzle of the buttemilk dressing.  Breaking the disc open, a filling of shredded pork was revealed with a taste and texture not dissimilar to pickled pork.  Very enjoyable but a dressing with some more zing was needed to contrast the subtle flavours and silky texture of the filling.  It was an awful lot of shredding and picking out the cartilage for some poor kitchen hand for us to the devour them in a few mouthfuls.  They didn’t even touch the side.

We continued to eschew wine in favour of the amazing cocktails on offer.  I went for a very savoury Green Olive Spritz with Aperol, vermouth, sparkling wine, bitters, soda and enormous green olives whilst Pepsi went for a Smoked Caeser, a twist on the Bloody Mary (bloody delicious!)   Our Feed dishes arrived soon after.   Fried Chicken, buttermilk biscuit, low country sausage gravy ($28) was a standout – hot, crisp and juicy and the buttermilk biscuits and gravy were better than anything I’d tried in the States given that almost everything in the USA is out of a packet, ‘just add water’.  Will be ordering this again next time. 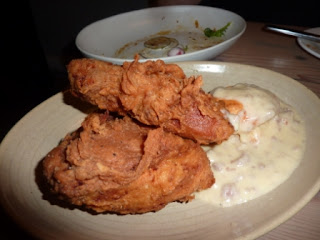 I’d wanted to try the Pulled Pork w maple bacon, yoghurt, apple but you can’t have it all so we settled on Glazed Beef Rib, ginger beer, parsnip, yuzu ($33).  Pepsi told me he wouldn’t typically go for the ribs but after seeing it delivered to the table next door, the deal was sealed.  Really one enormous rib, the meat was tender with just the right amount of stickiness.  I’m not a fan of parsnip so passed I the caramelised slices on to Pepsi.  A very grown up version of ribs. 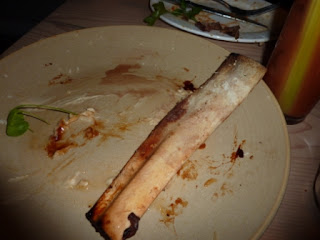 With the last biscuit split between us, the meal was done and so were we.  Our server had told us to save room for dessert but after a late meal, time was getting on and the moment had passed.  Pity, because there were plenty of peanutty, mapley, cheesecakey things to choose from.  Upon re-reading the menu whilst drafting this post, I’ve spied many other meals I’d like to try.  My visits to Sydney are few and far between these days but maybe there’ll be a chance to visit later in the year and at an earlier time slot so I can experience the whole Hartsyard experience.  I promise to try for better pictures.  Thanks to my companion Pepsi for a riotous good time.