In the Dragon’s Lair

I grew up not far from Sunnybank when it still had the vestiges of market gardens and was on a sleepy street called Mains Rd that ended literally in a dead end at the Mt Gravatt Cemetary.  I recall collecting pecans that had fallen from the trees standing in the vacant lot behind the new shopping centre called K-Mart Plaza and traipsing through newly built Mater Prize homes on Sunday afternoons, oohing and aahing over white shag pile carpet and blue tiled rooves.  I also went to high school in Sunnybank and already the suburb had begun to change with new shopping centres, hospitals and a few snazzy new Chinese restaurants.  I moved away from home and got on with my life but something happened in the ensuing years.  Asian families and in particular the Chinese community started moving into the area. Asian grocers and hawker restaurants appeared followed by Asian banks and businesses and yet more restaurants.  There’s an urban myth that the suburb is shaped liked a dragon, a sign of luck and prosperity and that’s why it’s become a focal point for the community.  A quick look at a map suggests that it would be a very strange shaped dragon indeed. Whatever the reason, Sunnybank is now a thriving multicultural suburb, filled to the brim with fantastic Asian restaurants, particularly in Market Square, Sunny Park and Sunnybank Plaza.  Over the past few weeks, I been back to my old stamping ground and discovered some new delights. 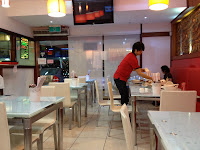 The amusingly named Fok Lok is a casual diner with white tiles, warm white lighting, white tables and clear plastic table cloths. They have a point and choose picture menu with descriptions on the back as well as a ‘special’s menu.

Unusually for us, we ordered three dishes as we were particularly hungry.  Pork & Tofu w Fried Mee Noodles, Salt & Pepper Calamari and one of the specials, Black Fungus Salad w Black Vinegar. They looked a little surprised when we ordered that last one! 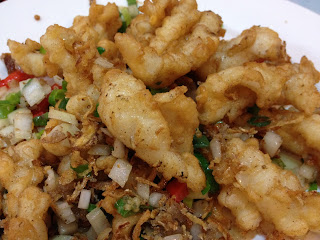 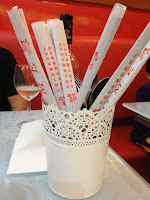 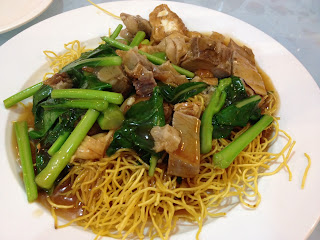 The kitchen wasn’t overly busy so our first dish arrived in a reasonable amount of time, the Pork & Tofu.  It was a very large serve and though I would have liked a little more tofu there was some nicely crunchy Chinese broccoli as an added bonus.  I prefer rice noodles over egg but on this night, I enjoyed the change.  The Salt & Pepper Calamari is quite honestly some of the best I’ve had in years.  This dish is often mistreated with limp, oily calamari that lacks crunch or kick.  This calamari was perfect – hot, crisp, salty and spicy with a generous scattering of fried shallots, spring onions and chilli.  My mouth is watering as I write this!  Black Fungus Salad is not the most attractive looking dish but was delicious and something I’d go back for.  The slippery textured fungus had no flavour but was a vehicle for the black vinegar and sesame oil dressing.  Some strips of crunchy pickled carrot added texture to this interesting meal.  We couldn’t finish all of this dish so took it home to have as a salad accompaniment for lunch on Sunday – it transported very well and still tasted wonderful. 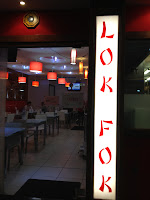 There was a fair turn over of tables on the night we went as well as one large group of jolly twenty somethings but there was no rush to move us on and it was never the mad house you see in similar places.  The dishes arrived in a staggered fashion and we had to enquire about our salad but we weren’t in any hurry and could hardly complain given the price – under $50 for 3 dishes including corkage (cash only).

Glamorous Wok
A week later, we were eating out on the same block.  We has seen Glamorous Wok on our prior visit but it was jam packed so we moved on.  This time we were organised and had a booking for our group of six. This place is hugely popular as it is billed as an authentic Taiwanese rather than Chinese restaurant so the ex-pats were there in droves.  On the Friday night of our visit, there were many large family groups enjoying the start of the weekend, from the tiniest tot to great grandparents.

Once again there was an extensive illustrated menu to choose from.  With a mixed group, we played it safe with Chinese Style Deep Fried Chicken, Calendula Stir Fried Beef, Stir Fried Veges w Soybean Sauce and New Sweet & Sour Ribs plus some steamed rice.  Despite it being busy, our food arrived in record time.

Calendula Stir Fried Beef was served in a deep cast iron hot pot.  Calendula is from the same family as the Marigold and is supposed to give food a peppery flavour.  I’m not sure if the dried petals, leaves or roots were used in this instance but it no doubt contributed to the overall savoury umami flavours that are so moreish in an Asian meal.  The New Sweet & Sour Ribs were a hit.  Thin, boneless pork rib pieces in a sticky coating, they were ever so slightly chewy and caramelised from being double cooked which added to the overall enjoyment.  There was not a hint of the cloying sweet and sour sauce that I abhor. 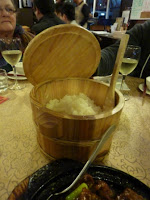 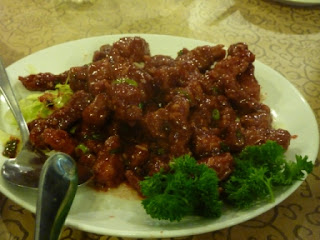 Chinese Style Deep Fried Chicken was not really in a Chinese style as it was boneless, but that suited us. Served with a thin, tangy and spicy sauce it was topped with enough onion for the whole restaurant, let alone this one dish.  After shifting the enormous layer of onion, we enjoyed the dish though it was not a particular highlight.  Stir Fried Veges was a large serve of Asian spinach with garlic – plenty to up the vegetable quotient for the evening as there wasn’t much vege action in the other dishes. 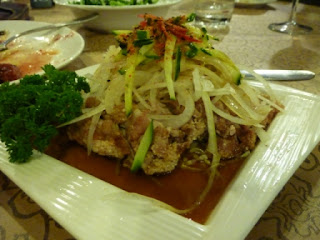 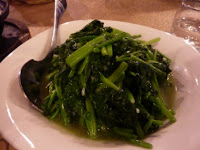 I have seen reviews stating that the meals are overly oily and yes, whilst there was some oil in the dishes, it certainly didn’t detract or overwhelm.  People have also complained of rude staff and communication barriers.  We experienced none of this and in fact, the hostess walked outside with us to show us the popular Taiwanese breakfast menu they also have on offer.

This is a casual diner for a quick meal or to catch up with friends.  It’s not haute cuisine but is tasty and satisfying.  We were delayed by traffic so by the time we arrived, the rest of the group were seated and had enjoyed some crumbed calamari as well as as serve of fried rice.  Six dishes, rice plus a beer and corkage came to a grand total of $98 (cash only).  A bargain.